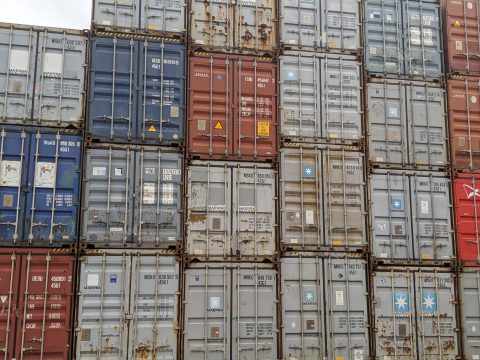 Record volumes are transiting through the International North South Transport Corridor (INSTC) this year, but it has little to do with rail. Shipments are passing through Iran by truck, as the railway network in the country remains the missing link on the corridor.

The company claiming record volumes is the Islamic Republic of Iran Shipping Lines (IRISL), an ocean liner that has picked the fruits of the corridor in the past four months. From March until June, it has transported 27,500 TEUs of container commodities along the INSTC, it says.

How? Mostly by shipping. And that is possible because there are several ports included. From the Russian port of Astrakhan, several sea shipping routes are available across the Caspian Sea; to the port of Baku in Azerbaijan, or Iranian port of Anzali. After a road leg across Iran to Bandar Abbas in the south of the country, several sea routes are available again; to Mumbai in India, or to ports in the United Arab Emirates.

According to the Iranian national media platform IRNA, where the record volumes were reported, the INSTC now counts 14 possible routes between the ports of India, United Arab Emirates (UAE) and Russia, whereas it started with two routes. The number of routes has rapidly grown in the last two months.

But what about rail? Wasn’t this corridor meant to be a sea-rail route? Yes, but until the missing railway link in Iran is not completed, trucking through Iran is the way forward. Furthermore, the railway route through Azerbaijan seems to have been replaced – at least by this company – with transit via the Caspian Sea.

But this should be good news for the rail industry too, as the corridor is now being used, and becoming familiar with the end customer. Once all the missing railway links are completed, it may take a smaller step to turn to rail on a corridor that is already known.

In order to get there, the railway link between the Rasht and Astara must be realised. This would enable cargo that enters Iran via Astara to enter the Iranian railway network. If the financial resources are there, it will be completed within three to four years,, the Iranian government recently said. It is looking at Russia for financial support, as this neighbouring country would benefit from the infrastructure.

Sooner to be completed is the Rasht-Anzali line, a much shorter railway line linking Rasht with the Bandar Anzali port on the Caspian Sea. Cargo that arrives in Iran via this border would be able to hit the rails in Rasht, from where it can continue all the way south.

The Iranian port of Bandar Abbas is currently well connected by rails, but in order to provide for the most extensive rail offer, the Iranian government wants to complete the railway link to the port of Chabahar. This would, according to industry experts, be a better match for the INSTC, as the distance to ports in India is much shorter than the distance from Bandar Abbas.

Be it rail or sea, the corridor has received a lot of attention from the countries involved this year. Since the start of the war in Ukraine, Russia has turned more south than west. The corridor provides access to markets in India and around without the need for shipping across the Mediterranean Sea.

In the meantime, Iran benefits from the renewed interest in its transit potential. For many years, it has been impacted by US sanctions, which led to hesitance from mostly western shippers to take the route towards the east. For north-south traffic, these sanctions are less of a hurdle. With the completion of the missing railway links, it may finally become the railway country it aims to be.