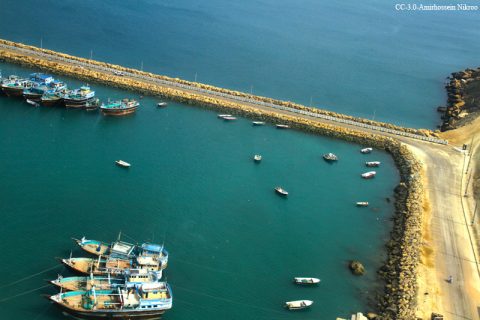 The noticeable growth of the North-South transport Corridor (INSTC) is putting key transport hubs in the foreground. India aims to invest in the Iranian port of Chabahar with six new cranes, recognising its importance in transhipping rail volumes coming from Russia and Central Asia on their way to India and other Southern and Eastern Asian countries.

A year ago, when the INSTC revived with the first rail shipment between Finland and India, the attention turned to Iran and its ports as an efficient alternative to connect Europe, Russia and Central Asia with India.

India proposed to include the Chabahar port in the corridor-a move signalling that the Persian Gulf could see a new hub in the making. This was so because the Iranian port of Bandar Abbas, used as the main transhipment point for rail services crossing Iran on the way to India, is quite busy. Most importantly, the port of Chabahar is not subject to the US sanctions imposed on Iran.

One main disadvantage of Chabahar is the lack of a railway connection. Yet this does not seem to discourage India from promoting its use and proceeding with equipment investments, which might show that it will gradually become as important as Bandar Abbas, and, why not, acquire a railway connection in the future.

In practice, India’s commitment to Chabbahar was showcased by the visit of Sarbananda Sonowal, India’s minister for ports and shipping, to the Indian Ports Global Chabahar Free Trade Zone some days ago. Sonowal presented six mobile harbour cranes that will be used in the port, while she also pledged that India would keep contributing to the port’s building and expansion.

She also underlined Chabahar’s strategic position in the INSTC and how it could contribute to reducing transit times and costs along the route since Chabahar is noticeably closer to India than any other Iranian port.

Chabahar might not be officially a part of the INSTC, yet, India is lobbying in this direction and might succeed in making this happen soon. Nevertheless, hub locations along the corridor keep sprouting in the region, with the latest addition being Turkmenistan and the port of Turkmenbashi.

With the Turkmenbashi port on the corridor, the route through Azerbaijan is no longer the only transit possibility. The port lies on the Caspian Sea, where vessels operate to ship cargo from train to train on all sides. Earlier, a multimodal service was launched crossing the same landlocked ‘sea’, with a vessel sailing between Russia and Iran directly.
The importance of this corridor has increased for Russia, as it is looking to diversify its trading routes amidst heavy sanctions imposed on the country. The INSTC is expected to cut the transit time between Mumbai and Moscow in half, based on the route via Azerbaijan.