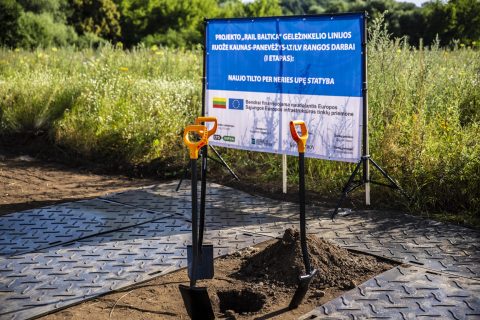 Rail Baltica has started the construction of a rail bridge over the Neris river, in Lithuania. When finished, it will be the longest railway bridge in the Baltic States. The project will cost around 64 million euros.

Constructions of the bridge began on 21 July near the city of Jonava, in Central Lithuania, roughly 30 km from Kaunas. The project is expected to take 2,5 years to complete and it will include the building of a European standard gauge railway double track. The project will allow freight trains to travel at a maximum speed of 120 km/h.

The bridge will play a vital role in the construction of the line towards Latvia. “Our task is to build the main line of Rail Baltica from Kaunas to Panevėžys by the end of 2024, and by 2026, all the way to the border of Latvia,” said Lithuanian Minister of Communication Marius Skuodis.

“The entire Rail Baltica section between Kaunas and the Lithuanian-Latvian border is quite a challenge because it is the first completely new railway section to be built in Independent Lithuania”, said Karolis Sankovski, CEO of LTG Infra, the company responsible for the Rail Baltica project in Lithuania.

General Director and Chairman of the Board of RB Rail AS Agnis Driksna stated that they “are determined to start the first runs on the Rail Baltica railway line in priority sections by 2027”.

The bridge will be 1510 m long and it will be built 40 m above the river level. There will be no supports in the water: the longest distance between the supports, where it crosses the river, will be 150 m.

Italian company Rizzani de Eccher won the procurement for the construction of the bridge last April. They will also overview the infrastructure works nearby the area.

Special attention will be paid to the environment as well. For example, constructions will not be carried out during fish migration periods. Moreover, the bridge will cross a Natura 2000 site, requiring additional efforts to protect the surrounding environment when building the bridge.

For sake of resilency, now bridges ,as any vitals and pending bottlenecks of railways, need to be be constructed, with “height” for future demand of Market, for 45 ton axial loads, etc.
With current high quality steel material, a standard UIC60 rail, with safe margins withstand that, but unnecessarily, by system, not even the current, modest 22,5…
(At basics of railways, currently by far, broken rail, is the most common reason for derailments, those most costly…)