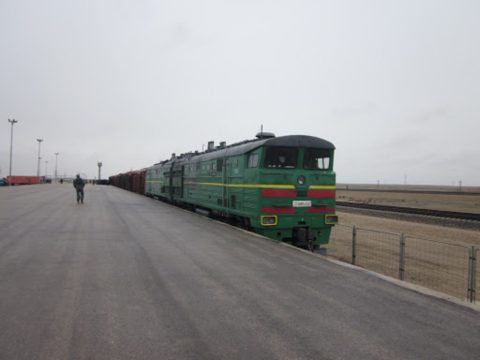 The Trans-Afghan railway that connects Uzbekistan to the ports of Pakistan is one step closer to realisation. Afghan officials have promised to finalise the roadmap, which had been delayed due to ‘recent developments in the region’.

Acting Foreign Minister Amir Khan Muttaqi from Afghanistan and Deputy Prime Minister and Minister of Commerce of Uzbekistan Sergei Omarzakov discussed the finalisation of the railway connection in a virtual meeting this week. A roadmap strategic plan for the 573km corridor was signed in February 2021, but so far, construction has not started. What do these recent statements mean for the project?

The Trans-Afghan railway line will run from Termiz in Uzbekistan to Mazar-e Sharif, Kabul, Jalalabad and eventually cross the border to Peshawar in Pakistan. Here, it will be connected to the existing railway network for access to the seaports of Pakistan.

The access to the ports is of great importance to Afghanistan and Uzbekistan, which are landlocked countries. The line is considered viable as it would boost trade between the Central Asian countries. It is therefore not surprising that several international investment parties have expressed interest in the project, although none so far have fully committed.

What needs to be done?

A cross-border line between Uzbekistan and Afghanistan exists, but a new line must be built from Mazar-e Sharif to Pershawar. Bakht-ur-Rahman Sharafat, head of the Afghanistan Railway department, was quoted by Tolo News explaining that ‘a survey will start within this month’. The aim of the survey is not entirely clear.

In March this year, the Uzbek government ‘officially launched’ the construction of the trans-Afghan railway road. Also here, it did not clarify what that means in concrete terms. There have not been any reports of actual construction.

Which hurdles are there?

Apart from the mentioned unrest in the region, the project itself is a challenging one, which could explain the extensive time spent on the road map. First of all, the railway line will probably cross Afghanistan through the mountainous region of Hindu-Kush, at an altitude of 3,500 metres. This will automatically make it one of the highest railway lines globally.

On top of that, the manufacturers will have to deal with the region’s particular conditions in terms of adapting to the weather during construction, adapting the supply chain of materials, and testing their durability in the harsh environment.

Finally, the difference of gauges that the three countries use (Uzbekistan, 1520mm, Pakistan 1676mm, Afghanistan 1435mm) is not something to overlook because it can impact transit times’ efficiency.

The project is estimated to cost 5 billion dollars, and will need to receive financial backing. The World Bank, the Asian Development Bank, the European Bank for Reconstruction and Development, the Islamic Development Bank and the Asian Infrastructure Investment Bank have expressed interest, but so far, none have committed to the project.

If the roadmap is indeed completed, it remains to be seen who will pay for the construction. So far, the project was mostly pushed by Uzbekistan, which will greatly benefit from access to the sea ports. Afghanistan will benefit too, but has limited resources for the construction of a new railway line.

In conclusion, the next step towards realisation remains doubtful. Judging by the announcements of the governments involved, the project is progressing, but this has not translated into concrete action.

Abdul Qahar Balkhi from the Foreign Ministry of Afghanistan tweeted after the most recent meeting: “The two sides discussed the expansion of trade, transit and transport between Afghanistan and Uzbekistan, as well as the finalisation of the roadmap for cooperation between the two countries and the Tirmaz-Mazar-e-Sharif-Kabul-Peshawar railway plan.

“Mr. Omarzakov also welcomed the recent progress on the roadmap for co-operation between the two countries, stressing that the roadmap would be finalised in the short term.” 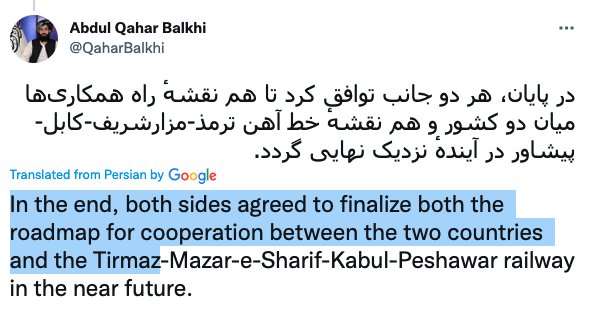