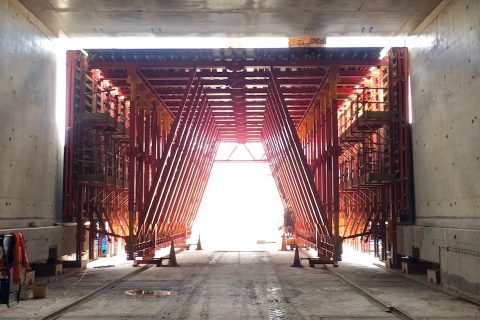 There’s innovation on the East Coast Main Line, as UK engineers begin a complex civil engineering project to install a prefabricated tunnel under the tracks. A massive concrete and steel structure is being hydraulically jacked into position under the existing tracks. It’s all part of a 1.2 billion pound (1.32 billion euro) plan to allow greater freight capacity without conflicting high-frequency traffic between London and Edinburgh. The project is set to take nine days to complete between 16 and 24 January.

The heaviest single engineering project on the East Coast Main Line upgrade programme is set to get underway this saturday. A huge engineering team has the unenviable task of completing a pioneering tunnel installation, just as the first big winter storm of the year moves across the British Isles. Nevertheless, hardy infrastructure teams from Morgan Sindall and Network Rail are set to install an 11,000 tonne tunnel at Werrington, on the north edge of Peterborough, about one hour from London, at a critical junction for freight and passenger traffic.

Historically, the north-south East Coast Main Line artery has interfaced with several less busy east-west lines at flat junctions, with priority given to express services between London and Edinburgh. However, Increasing demand for time-sensitive freight movements, particularly between East Coast ports, such as Felixstowe and Teesside, has been one of the factors that has prompted Network Rail, the UK infrastructure agency, to bring forward a wide-ranging program of enhancements. This grade separation at Werrington represents one of the most ambitious of all the individual projects. When complete, the enhanced junction will give much improved access to the almost parallel lines that run through Lincoln and Gainsborough – often referred to as the ‘Cathedrals Route’ – and critical for freight traffic.

The nature of East Coast freight traffic has radically altered over the years. The predominant slow and unfitted coal and wagon-load trains have long gone. They have been replaced by time sensitive intermodal flows from busy ports to inland distribution terminals, and heavy bulk traffic carrying aggregates or quick turnaround biomass fuel for power generating stations. With the intention of providing more fast passenger services and the introduction of high-speed light goods on the main line, there is an urgent need to increase capacity on the East Coast route. This tunnel project is a significant part of that project.

Network Rail say preparations for installation have been underway for nine months. Engineers have been prefabricating the tunnel on site, at the side of the East Coast Main Line, while services have continued to operate. Now, a nine-day possession, starting on Saturday (16 January) will allow installation of the 11,000-tonne structure. What they describe as a curved concrete box weighing more than the Eiffel Tower is to be pushed into position in an operation not seen before in the UK.

The prefabricated concrete construction is ready to be pushed into place along pre-installed guiding supports, after the three tracks above have been temporarily removed. Network Rail claims that using a traditional method of installing would have meant closing the ECML completely for about a month. This technique, they say, will allow a reduced level of service to operate at the same time. The pioneering work is providing inspiration for even greater projects, such as the Fehmarnbelt proposal between Germany and Denmark.

Keeping disruption to a minimum

“This is a massive engineering challenge, but it will avoid hundreds of hours of closure on one of the most important lines in the country”, said Paul Rutter, the Network Rail route director for the East Coast Route. “In the past, Network Rail might have approached this problem by thinking about the easiest way to do the engineering. Instead, we have come up with a creative and innovative solution that will deliver massive benefits while keeping disruption to a minimum.”

The new tunnel is a 155-metre curved concrete box that will be pushed at 150cm per hour, using massive jacks to propel and steer it into place. It will be the first time this construction technique has been used in this way in the UK. The technique has been used in Europe, where tracks have been pushed under highways and tracks, but in the UK, ‘cut and cover’ has traditionally been the solution. A recent example was the tunnel constructed under the busy highway circling Edinburgh. That project allowed the building of a new railway, but disrupted the City Bypass for almost a year.

There is a long ‘to do’ list for the East Coast Main Line, and this tunnel installation is only part of that programme of works. During spring and summer, there will be engineers at work, on sites mainly around London, affecting freight and passenger services at a number of complicated interfaces in the north west of the city.

Meanwhile, although passenger services will be very restricted during the possession, the work at Peterborough coincides with a significant overall reduction in passenger services just announced in the UK. Due to the current national lockdowns, passenger train operators are cutting back services on most routes, including the East Coast Main Line. Long term however, the demand for capacity on the ECML is expected to recover, and the dive under will be even more important in seeing the economic recovery move forward without conflicting train movements at Werrington. The sight of idling freight services impatiently waiting for access to the fast tracks will be consigned to history, along with those slow coal trains of the past.