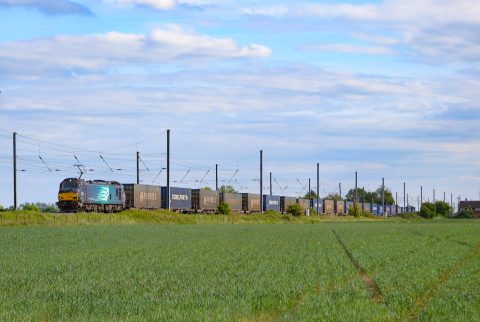 The UK government has today announced additional funding to implement real-time digital signalling on stretches of the East Coast Main Line as part of a programmed upgrade. The investment of 350 million British Pounds (388 million euros) represents an increase of over twenty per cent to the existing budget for the line.

The UK transport secretary, Grant Shapps has today confirmed further expenditure on the busy East Coast Main Line. The route, famous for the ‘Flying Scotsman’, connects London with Doncaster, York, Newcastle and Edinburgh, and supports branches to industrial areas of the East Midlands, Yorkshire and the North East of England.

More paths for freight and passenger

The line carries a mix of traffic, including commuter, regional and long-distance passenger traffic, as well as intermodal and bulk freight flows. There is also specialist, infrastructure and part-route traffic. Paths are at a premium, with more operators using the line than almost any other route in the UK.

By announcing investment in resignalling the route, the transport secretary has today pushed forward an agenda of increased path availability to help tackle the growing demand on the line. The infrastructure agency Network Rail already has in place a ten-year programme of investment, worth 1.2 billion British pounds (1.33 billion euros). That programme is due for completion by 2024.

It was only last week that the industry-wide High Speed Rail Group advocated adding additional capacity on almost the entire length of the route.

Their report said the line would need to cope with future high demand for paths from HS2 services and increased freight activity. They said that modal-shift alone would significantly increase demand for freight paths, and advocated infrastructure development, particularly between Newcastle in the North East and Peterborough, north of London.

That may well impact on this signalling project, which is planned to include that section. See more details from RailFreight.com here.

Trials have been underway

While heavily promoted already, today’s announcement formally puts in-cab signalling on the agenda for the East Coast. The government is calling it the UK’s first mainline digital signalling installation.

The concept is not new to the rail industry, and efforts to standardise digital signalling have been going on for many years. Although the DfT statement does not specify the system, European Rail Traffic Management System (ERTMS) trials in the UK have notably included the Cambrian Coast line in Mid-Wales. This East Coast Main Line project is however on a much larger scale, and in a more diverse traffic environment.

In their statement, the DfT says the new technology will allow signallers to know exactly where each train is at every minute of every journey, allowing train and track to talk to each other continuously in real-time. “This ‘in-cab’ system will mean an end to conventional signalling at the side of tracks, first used in the Victorian era.”

Network Rail has a programme of collaboration with freight operators, to retrofit in-cab technology to locomotives. The DfT say that they are in communication with operators on the East Coast, so that motive power will be compliant with the new signalling installation.

The transport secretary also reaffirmed a commitment to further modernisation. “Upgrading this country’s conventional signalling system, and giving drivers technology fit for the twenty-first century, will boost train performance, cut delays, improve safety and support the supply chain”, he said. “This is just the beginning. In time, we will digitise signalling right across the country to make good on our promise of better reliability and punctuality.”

The introduction of digital signalling is also set to create high-skilled jobs across the supply chain, claims the government, saying it will help boost the economy as the UK builds out of the coronavirus pandemic.

The upgrade, initially between London and Grantham, is intended to benefit the whole route, according to the DfT. “Delays in the south of the route have a knock-on effect further north, so the modernisation work will make life easier along the entire length of this vital national asset”, they say.

No timescale is given by the department, other than the original decade-long upgrade to the Anglo-Scottish route. They do however commit to a rolling programme of signalling upgrades, which is already underway on several other main routes.