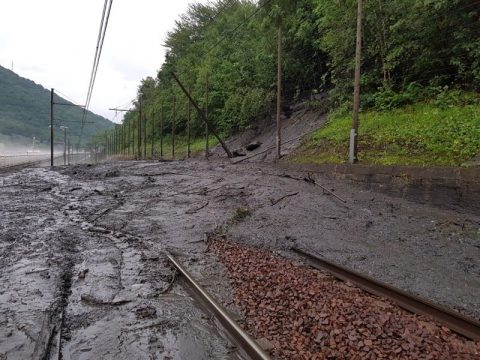 Many trains cancelled, some rerouted between France and Italy

A plan is in the making to reroute freight trains on the disrupted railway line between France and Italy. Four alternative routes have been identified, some of them already in use. However, a large majority of the train services via Modane has been cancelled.

This was the first update after a line closure of at least six weeks was announced on the vital North Sea Mediterranen corridor. The cause is a mudslide that blocked the railway track in Maurienne valley on 2 July. On Thursday 4 July the French infrastructure manager SNCF called for a complete line closure until 15 August.

Several alternative routes are currently being studied by SNCF in close cooperation with the railway undertakings involved. The first route runs via Marseille in southern France, entering Italy at Vintimilles. However, this route has limited capacity due to dense passenger train traffic.

The other three routes run via Switzerland: a first via Dijon and Vallorbe, another via Bale and one more via Geneva. The route through Vallorbe is congested too, SNCF added. The routes through Bale and Geneva have more capacity, but come with certain restrictions. Railway undertakings are currently assessing safety elements and the availability of locomotives and train drivers, SNCF explained.

Although some alternative train paths are available, many scheduled train trips have been cancelled. The Italian railway undertaking Mercitalia (subsidiary of Ferrovie dello Stato Italiane) usually runs 40 trains per week via the route, only five of these could be rerouted, a spokesperson said. The rerouting was done via Switzerland.

Another railway company, DB Cargo, operates 10 trains per week on the French-Italian connection via Modane, all of which have been cancelled for the time being. A spokesperson said that the railway undertaking is studying the alternative routes, looking at available capacity, locomotives and train drivers. “This is an important route for transport to Turin in the north of Italy on the one side, and Lyon in the middle of France on the other side”, the spokesperson added.

Meanwhile, operator Hupac started rerouting its Busto-Barcelona-Busto blocktrain via Antwerp in both directions. “Due to the fact that the line will remain closed longer than this week, we will keep the gateway via Antwerp as a back-up solution. This is in order to give continuity of service, but assumably with a longer transit time and for limited quantities”, a spokesperson of the company said.

Nevertheless, it had to cancel two departures per week in both directions. “The impact of this disruption is significant both in economic terms and in terms of service and loss of image. We will try to rerouting trains via Ventimiglia, but at restrictive economic conditions. The gateway service via Antwerp will remain”, the company commented.

The impact of the disruption is expected to be large and many immediately referred to the Rastatt debacle, which paralysed international rail freight traffic for seven weeks in the summer of 2017. However, this time the lessons learnt from the last incident should enable the industry to deal with the contingency in a more suitable manner. Certain procedures are put in place, following the Handbook for International Contingency Management.

According to the handbook, a predefined rerouting overview is available for for each Rail Freight Corridor (RFC). These include “off-the-shelf” re-routing options and traffic management scenarios that minimise traffic disruptions. The document also describes the process to be followed: the corridor management and infrastructure manager involved must take the first mitigation measures within 12 hours after the accident. A rough indicative timetable should be available 24 hours later.