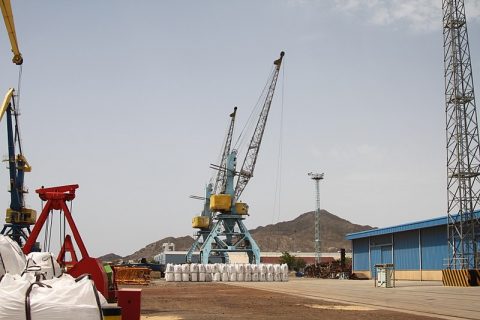 Turkmenistan has opened a new port on the Caspian Sea. The Turkmenbashi Sea Port should triple Turkmenistan’s cargo-handling capacity to 25-26 million tonnes a year.

Turkmenbashi port is an important transit hub for cargo traffic between Europe and Asia. The port links to Europe by sea, while it connects to Central Asia and China by rail and road. In order to fully capitalise on its geographic position, the government of Turkmenistan has invested heavily in the development of a new, modernised gateway. The project was completed at a 1.3 billion Euros budget.

According to the government, it will have crane productivity of 25 TEUs per hour, annual capacity of 400,000 TEUs spread over 249,00 square metres (2.7 million square feet) and a quay of 510 metres. The port has container handling facilities and a polypropylene terminal which will handle products from a nearby plant set to be launched later this year.

At the official opening ceremony, Turkmen President Gurbanguly Berdymukhammedov said the new port will be an important link in a modern maritime transport system giving users favourable conditions for access to the Black Sea area, Europe, the Middle East, and Asia. Especially exporters from the west of China may benefit from the modernised gateway, as the Caspian Sea is the nearest sea route available.

However, the port faces stiff competition from other Caspian Sea ports, mainly that of Aktau in western Kazakhstan, which is now also connected to China by rail. With the start of a new vessel service, it provided the missing link on the Middle Corridor, which takes cargo from China to Kazakhstan, across the Caspian Sea to Azerbaijan, Georgia and Turkey. As the Turkmen railway connects to China through Kazakhstan, there is no geographic incentive for shippers to opt for the Turkmenbashi port. In this regard, Turkmenistan is more likely to capitalise on north-south cargo flows, due to its railway connection with Iran and Afghanistan.