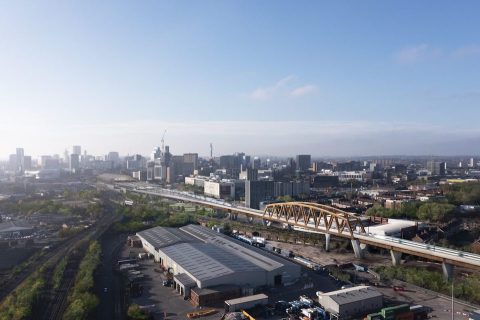 Published on 15-12-2022 at 06:00
Impression of the Curzon Viaduct 'Bellingham' bridge bringing HS2 trains into BirminghamCGI image by HS2 media centre

The company building Britain’s high-speed railway project, HS2 Limited, has revealed designs for the viaduct that will span the 150-metre section on final approach to Birmingham’s new Curzon Street Station. The bridge design features a 25-metre-high central truss, which the company says will create a new icon on the city skyline. The superstructure will be illuminated by a visual art installation conceived by Glasgow-trained Liz West.

A series of elevated structures will bring HS2 tracks into the centre of Birmingham. The crowning glory will be the arch of the final bridge, currently under the engineering title of Curzon Viaduct Number Two. The 150-meter span will cross existing tracks and Industrail land, including the inner-city intermodal terminal, delivering tracks to the throat of the terminus.

Tallest structure on the approaches

HS2 design may have been described as modern utilitarian, but a touch of artistry is intended for Birmingham. A unique light installation, designed by Glasgow School of Art rained British artist Liz West, is proposed for the bridge on the approach to the Curzon Street station. The work, titled Out of the Blue, will, according to HS2, establish the bridge as a “stunning feature of the city’s landscape both during the day and at night, when the artwork will come to life.” The bridge will be the tallest structure on the Curzon Street approaches.

The HS2 project will provide a new, high speed and dedicated line between London and Birmingham, reducing the 120-mile (192 km) journey to around one hour. The UK government say the project will release much needed capacity on the West Coast Main Line, which is already Europe’s busiest mixed-traffic route. The cost of the project, which has attracted significant controversy, has been variously estimated at up to 100 billion pounds (120 billion euro) and is set to rise further due to spiralling inflation in the construction sector.

“Our design ambition for the Curzon Two bridge is to create an elegant, iconic structure, fitting of its prominence on the Birmingham skyline, creating a legacy for HS2 and contributing positively to the city’s identity day and night”, said Kay Hughes, the design director for HS2 Ltd. “The curved truss design celebrates Birmingham’s industrial heritage, and we’re pleased that we’ve been able to engage a prominent artist to create a distinctive lighting installation, which will be a striking addition to Birmingham’s city skyline.”

HS2 trains will cross the bridge to leave the city towards HS2’s Washwood Heath Depot. The site, located northeast of Birmingham City Centre, will maintain, service, and store HS2 trains when not in use. The company say that will generate over 500 long-term jobs for local people. The design of the viaduct has been amended, widening the deck by four metres, allowing the bridge to carry three parallel high speed rail tracks over the existing east-west rail line. This will improve flexibility on approach to Curzon Street’s seven platforms.

Proposals to name the structure the Bellingham Bridge, in honour of Jude, the locally born England international footballer, have been quietly understated since the elimination of the team from the World Cup. As far as we know, ideas to name the bridge ‘Kane Cantilever’ are … wide of the mark.