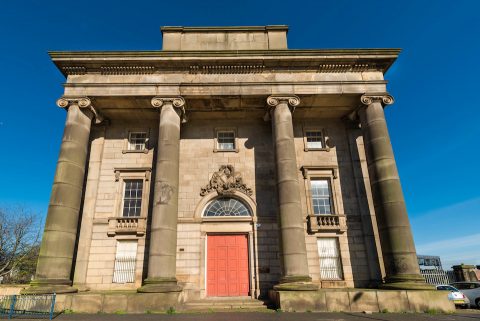 Birmingham’s historic Curzon Street Station will be integrated into the city’s new HS2 terminus. A deal has been struck to save the world’s oldest surviving monumental railway architecture. The building will be preserved and incorporated into the new HS2 Curzon Street Terminus. Building work is already well underway to transform the derelict site into a showpiece for the project, and help with the city’s economic regeneration. The entire project, a high-speed line between London and Birmingham, is budgeted at over 100 billion pounds (110 billion euros).

HS2 has received the go-ahead from Birmingham City Council to work on the early nineteenth-century Curzon Street station. The administration’s leader, Councillor Ian Ward, said it was an important milestone in the city-centre transformation. “This amazing old building and the new Curzon Street Station will be one of the real show pieces of the entire HS2 network.”

The agreement with Birmingham City Council, who own the Curzon Street building, enables a long-term lease by HS2. The building, which has the highest ‘Grade One’ historical protection, has been integrated into HS2’s plans, which provide for an enhanced setting to reflect the history of the old station, as well as the adjacent Grade II listed Woodman public house. The public space surrounding the station will feature the historic track alignments of the former goods yard, and the gardens and concourse have also been designed to complement the architecture of the building. Elsewhere, HS2 is promoting its environmental credentials with a massive tree-planting programme. This winter, the company’s specialist ecology teams intend to take trees planted to over 300,000 across this phase of the route, taking the total number of trees planted between London and the Midlands to over 730,000.

In the three months from last September, HS2 Ltd claimed to have created around 500 new directly employed jobs, aimed that new entrants, career changers and job seekers. Those roles were in addition to over 20,000 jobs that HS2’s main works construction partners and station contractors announced they would be creating over the decade long project to deliver the London – Birmingham section of the railway.

Birmingham, which is among the busiest cities in Europe, will benefit from HS2’s commitment to rail freight. Aggregates in and spoil out will go by rail, while construction materials will also be among the planned 15,000 freight train movements in support of the project.

The 1838 Curzon Street facade, designed by the notable architect Philip Hardwick, saw service for a relatively short time as a passenger terminal, but survived as a working goods station until the last day of 1965. Having suffered extensive damage during the 1943 Birmingham Blitz, and surviving two applications for its demolition in the 1970s, it is now listed on the ‘Heritage at Risk Register’ maintained by Historic England. The repurposing of the building will see this status change for the first time in over a decade. Future plans include an HS2 visitors centre.

Curzon Street’s preservation and rehabilitation is in stark contrast to the fate of the even more famous Euston Arch in London. The doric columns were unceremoniously dismantled and dumped in a redundant dock when Euston Station, soon to be the London terminus of HS2, was last redeveloped. The station re-opened in 1968, just as the last tracks were lifted at Curzon Street. Historic High Speed 2 has come full circle.