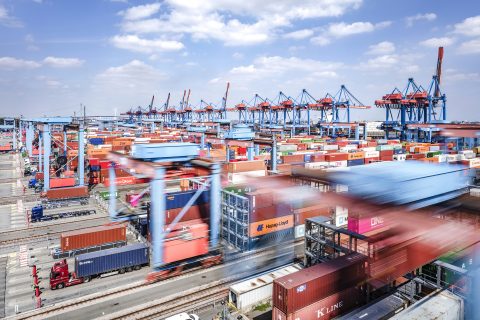 Hamburger Hafen und Logistik AG (HHLA) witnessed a positive modal shift this year. While rail volumes increased, cargo over the road decreased, and the overall rail share of the Hamburg-based transport company rose. This is a positive development, considering the many challenges currently faced by the rail freight industry.

In addition to moderate growth for traffic with the North German seaports, a strong increase in Polish traffic and in the German-speaking market contributed to this development, HHLA explained. Road transport, on the other hand, saw a significant decrease in the first half of 2022. In a persistently challenging market environment, transport volumes decreased by 8.2 per cent to 142 thousand TEU (previous year: 155 thousand TEU).

With year-on-year growth of 11.4 per cent to 281.6 million euros (previous year: 252.9 million euros), revenue growth was stronger than the increase in transport volumes. Some reasons for this were the further increase in the rail share of HHLA’s total intermodal transportation from 81.4 per cent to 83.3 per cent and temporary surcharges that were required in order to partially offset the spike in energy prices.

The weak EBIT performance was primarily due to operational interruptions due to storm damage, ongoing disruptions to supply chains and the sudden spike in energy prices, which could only be passed on to the market after some delay.

In general, HHLA recorded a positive performance in revenue and earnings in the first half of 2022. The company benefited in particular from a further rise in storage fees in the Container segment resulting from much longer dwell times for containers at HHLA’s facilities, but also considers increases in the rail share as a main contribution.

Angela Titzrath, Chairwoman of HHLA’s Executive Board: “For more than two years now, we have all experienced how volatile the logistics sector is. The restrictions in place to fight the coronavirus pandemic, weather conditions, road and rail construction work and now the war in Ukraine with the subsequent sanctions against Russia have a massive impact on global supply chains.

HHLA may have successfully completed the first half of 2022, but the disruptions to supply chains still continue to pose major operational challenges for us. It is not currently clear when this situation will return to normality or what consequences the global crisis will have for the economy and for society. HHLA is doing everything it can to contribute to the reliable supply of businesses and consumers. We are continuing to focus on the implementation of our strategy, which is based on growth and sustainability – especially in these uncertain times.”

Good news, but sustainable?
(Subsidies shall not be permanent!…)
Without the urgently needed: added capacity and utilisation of assets, nor safely proving a low LCC device, neither railways will become “green”, but, remain, “cemented” – at the mercy of taxpayers!