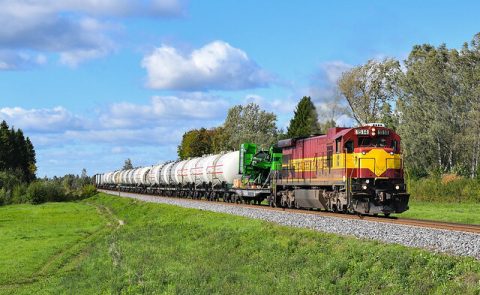 In June, Estonian freight operator Operail asked Estonian Railways for cheaper rates for coal from Kazakhstan. The request, accepted by EVR, is to halve the current fee, from 2,2 euros per ton to 1,1 euros.

Operail claims it can move between 30,000 and 50,000 tons of coal from Kazakhstan every month. The introduction of the new fee will allow the company to apply more competitive prices for its customers. Latvian Railways, for example, is charging between 6 and 7 euros per ton to its customers, which is what Operail is aiming for.

EVR expects to yield 30,000 euros per 30,000 tons of coal from Kazakhstan. Because of deteriorating relations between Russia and Kazakhstan, coal freight transportation through the Baltic area became more difficult. Russia could still apply restrictions and block freight trains bound for Estonia, as happened for Latvia.

Moreover, Estonia can not handle large quantities of coal in its freight terminals anymore. Russian blockades will “not prevent Kazakhstan from exporting coal, but they will have to find new trade corridors in cooperation with Russia”, Raul Toomsalu, chairman of the management board at Operail told Estonian public broadcaster ERR.

However, as the head of commerce for Estonian Railways, Arthur Raichmann told ERR, having the price agreements is a positive first step since it is likely that Estonia will get some coal. The cheaper rate will stay until the end of the current operational schedule. After that, there will be an analysis of the results that will allow new decisions to be made.

The impact of the war

Rail freight volumes in Estonia precipitated by 60 per cent after the application of sanctions on Russia. Consequently, Operail recently turned to China and Central Asia (Kazakhstan, Uzbekistan, and Turkmenistan) to make up for the losses caused by EU sanctions.

Transporting raw materials from China is more expensive than sipping from Central Asia. In addition, there is no significant demand for goods to send back to China, further complicating the business relationship. Three months ago, EVR requested an additional 10 million euros in state financial support to recover from the losses caused by the war.

Estonia is not the only Baltic country affected by the consequences of the war in Ukraine.
Latvia has experienced decreases in freight traffic from Russia and Belarus, which forced Latvian Railways to terminate 600 employment contracts. On the other hand, there has been an increase in freight traffic from Central Asia, especially Kazakhstan.

When it comes to Lithuania, Lithuanian Railways was also forced to release roughly 2,000 employees to deal with increasing financial losses. LTG forecasted that the impact of the war on freight traffic will lead to a loss of 150 million euros. The company is trying to introduce more appealing services with drops in freight rates and new routes to Germany and Poland.