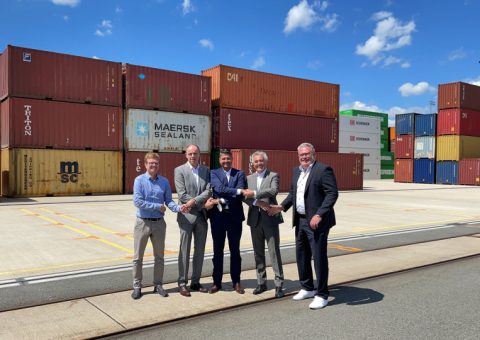 Contargo is expanding its facilities at the Voerde-Emmelsum river port near Duisburg in Germany. The logistics service provider won a tender from DeltaPort GmbH & Co KG for the operation of an 11,000-square metres site, which will be used to extend the quay by 130 metres and probably bring more volumes on rail.

“The expansion will allow the logistics service provider to further expand its service portfolio on the Lower Rhine and in the northern Ruhr area. Contargo is also responding to the strong development of the port area by DeltaPort. The establishment of new, large companies will further increase throughput volumes in the port of Voerde-Emmelsum and the Rhine-Lippe port of Wesel,” said Contargo.

The Voerde-Emmelsum port has a trimodal profile, much like most inland port terminals in Contargo’s network. It offers barge, rail and road connections, while its proximity to the logistics hub of Duisburg and Dutch ports makes it an ideal location for short and efficient transport solutions. Contargo has been operating in the area since 2017.

Contargo is planning to make a substantial investment in Voerde-Emmelsum. The quay expansion will cost the company around 15 million euros, and it is expected to make a difference in terminal operations since, according to Andreas Stolte, managing director of DeltaPort, “extra storage and distribution centres in the port also need more transhipment capacity.”

More companies in the port mean increased traffic; thus, Contargo’s expansion plans perfectly fit the broader growth trend. However, these developments will also benefit the logistics company and its customers. “The expansion will significantly broaden our range of services for customers. In the future, we will be able to handle two barges and a complete train parallel to each other at our terminal. Ideal conditions for so-called hub transport,” commented Sascha Noreika, managing director of Contargo Rhein-Waal-Lippe.

Even though the terminal’s expansion will not target rail infrastructure, the increased barge capacity could indirectly impact rail operations. As Contargo mentioned, it will be possible to handle two barges and one train simultaneously, possibly meaning that trains will depart from the Voerde-Emmelsum terminal with more cargo volumes than before. Maybe this could be a good opportunity for the terminal to acquire more rail links.

Regrettably currently quality of service rendered, by railway operators is hampered, by infrastructure managers.
Mode is too risky, for ware owners, that have shifted strategy to “On Demand”. (Regrettably now the On Road device, for majority, is the single available – at distances, as far as 1000 km from port.)
For making railways timely, now basics, the infrastructure has to be upgraded. 32,5 ton, safely allowed, axial load should be min. at any reinvestment, etc.