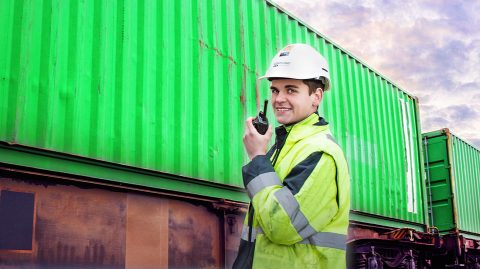 Published on 25-03-2022 at 12:04
Portrait of shipping worker checking cargo containers at train station ready to be dispatch to the market.

Contargo is launching a new shuttle between its terminal in Frankfurt and Antwerp. The weekly service will start on Monday 4 April with the first departure from Contargo Industrial Park Frankfurt-Höchst.

The shuttle will have a stable schedule of one departure every Monday. The train arrives in Antwerp the next day around 5pm, and calls on the terminals 869 en 913 on Wednesday. After that, it makes its return trip to Frankfurt.

“With the Frankfurt-Antwerp shuttle, we offer shippers from the region and neighbouring states an excellent alternative to the port of Antwerp”, says Kawus Khederzadeh, director of Contargo Industrial Park Frankfurt-Höchst. “This connection is ecologically and economically sensible and also a good addition to
combined transport with inland vessels.”

With the new schedule, the existing Frankfurt- Rotterdam shuttle of Contargo will get an additional departure, which means it will have three instead of two departures to the Dutch seaport.

Contargo has a dedicated focus on the western and north-German seaports and its European hinterlands. However, it is also looking towards the east. Last month, Contargo North France launched a new rail freight service from its terminal in Valenciennes towards China.