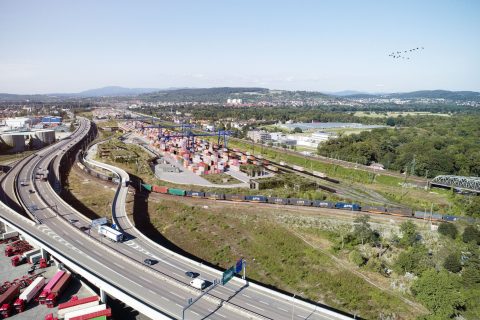 Switzerland’s under-construction Gateway Basel Nord trimodal terminal has submitted plans to create a nature conservation concept in its area. The project aims to create a meadow bridge for migrating animals on top of a 45,8-hectare replacement area that will be home to diverse species of plants and animals.

The Gateway Basel Nord trimodal terminal located on the junction of the Swiss, German and French border is a joint venture between Hupac, SBB Cargo, and Contargo. The company was founded in 2015 to implement a terminal for import-export traffic. It is called trimodal because apart from rail links, it will be able to serve inland shipping operations since located on the Rhine and also road transport.

The terminal has been subject to criticism, especially from Swissterminal, the provider of container terminal services in the Swiss area of Basel. Back in 2018, Swissterminal lodged a formal complaint against the federal funding for the planned container terminal project Gateway Basel Nord, claiming that it creates unfair competition. A Swiss court decision from 21 January 2020 delayed the terminal’s construction even more since it upheld an appeal from Swissterminal, finding that the Swiss Rhine Ports, also involved in the Gateway Basel Nord project, undermined competition because it proceeded with the terminal’s construction without holding a public tender.

It seems now that those disputes are resolved, and the Gateway Basel Nord trimodal terminal is moving forward with construction plans to “make Basel Switzerland’s most important freight transport hub, and contribute to the modal shift by shifting 50 per cent of the container transport in the area from road to rail”.

“As part of the implementation of the project, Gateway Basel Nord aims to minimise the encroachment on existing natural space wherever possible and provide sufficient additional space. For this reason, Gateway Basel Nord submitted a comprehensive and revised nature conservation concept to the Federal Office of Transport”, explained the company.

The first nature conservation plan from Gateway Basel Nord concerned creating and enhancing a forest area. “As a large number of valuable plants and animals have settled overtime on the site in terminal’s site, Gateway Basel Nord has defined ecological replacement areas of 45,8 hectares in 2020”, said the company. The forest area will cover a four times larger area than the terminal (11,5 hectares) and become a biodiversity hub.

On top of that, an animal migration bridge will be built. It will occupy approximately 4,000 m2 and be 300 metres long, covered with a dry meadow. Its purpose will be to facilitate the movement of animals and plants in the area without subjecting them to danger due to the rail and road infrastructure and the constant movement of vehicles of all types.

We are convinced that our nature conservation concept is a very prudent approach to nature, able to replace the areas affected by the terminal project”, commented Martin Haller, chairman of the board of Gateway Basel North. “It is imperative to keep the promises we made in the “Hafenbecken 3″ referendum campaign. Therefore, our current concept includes even more measures for nature than those announced one and a half years ago”, he added.