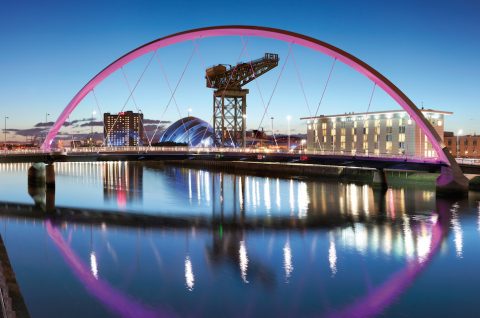 Vivarail, in collaboration with the UK infrastructure management agency Network Rail, is set to run its ground-breaking battery train technology to COP26 in Glasgow in November. The company, which has made the headlines by repurposing redundant London Underground stock, plans to run shuttle services from Glasgow’s Central Station to the climate conference venue in the city’s west.

Originally promoted as a low-cost entry into zero-emissions transport solutions for passenger services, Vivarail is also working to raise the profile of its designs and technology for light logistics. The movement of smaller consignments is widely considered a big opportunity for rail freight in the UK. Several operators are on the verge of ramping up existing niche operations and launching brand new services.

Exposure to a number of audiences

Vivarail and Network Rail have jointly announced that the company’s “next-generation” battery train will be launched at COP26 and will run daily services throughout the international climate change conference. The zero-emission train uses new batteries, developed by Vivarail, to combine maximum range with the ability to recharge quickly. Vivarail say the result is a train that can travel for up to 80 miles on battery power and recharge in only 10 minutes using their patented Fast Charge system. Fast Charge was developed with support from an Innovate UK grant and will begin its final stage of Network Rail approvals shortly.

At COP26 in Glasgow (1-13 November), Vivarail will support the UK Government and the wider rail industry ambition to reach net-zero and carbon reduction targets. It says it will bring its emission-free technology to several audiences, including graduates and global partners. Vivarail says it has been helped by SLC Operations, Alstom and VTG with drivers, electrical charging and transport. Given the last mile capabilities of the company’s trains, there is already interest from would-be urban logistics operators, who see this as a solution for their entry into the market currently exclusively owned by road-based operators.

Vivarail is not the only company with future fuelled, adaptable trains in the spotlight in Glasgow. A hydrogen-powered train will also feature in a fringe event at COP26, announced earlier this year by Network Rail and Porterbrook. “This will give guests, including leaders and climate experts, a first-hand experience of British technological innovation and expertise, and how alternative fuel trains of the future will play a vital part in building back better and greener from the pandemic”, says a joint statement.

Scotland’s government has already expressed a commitment to expanding freight operations. Their counterparts in London are keen to follow suit. “We are ambitious to make our railways even greener, and I am delighted that Vivarail will launch their flagship battery train at COP26, thanks to investment from our Accelerating Innovation programme”, said UK Rail Minister Chris Heaton-Harris. “Decarbonising the rail network is crucial to reaching net-zero by 2050, and this technology is another example of how we are building back greener.”

Vivarail has already put its technology to work in a commercial setting. Their trains provide rolling stock for the service on the Isle of Wight, where the low profile of former London Underground trains is ideal for the restricted gauge on the Island Line due to a height-restricted tunnel under the island town of Ryde.

“It is a great honour to be asked to support such an important event”, said Steve McBride, the Managing Director of Vivarail, who also announced the first overseas export of their ‘D-train’. “The achievement of an innovative British company like Vivarail to build a first in class train is a great example of our country’s ingenuity and ability to find new technologies and ways to do things. Our R&D team has spent three years developing these new batteries, working with specialists Hoppecke. The result is a new traction and charging system that converts diesel stock or acts as a range extender on other types of electric trains. We are now ready to play our part in delivering an electrified network in the shortest possible time. We have already sold our first train to the United States – with a second on order. As part of the RDC family, we have benefitted from insights and help from the US and Europe, so we know our products have ready export potential – helping decarbonise across the world.”