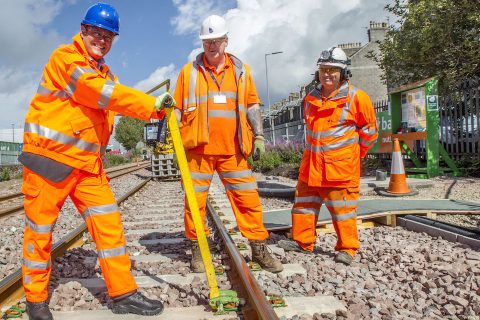 Message from Scotland: a smaller passenger, but bigger freight network

The post-pandemic opportunity for freight has been recognised by Alex Hynes, the managing director of Scotland’s Railway, branded as ScotRail. Hynes was addressing the Scottish Conference of the industry’s representative body, Rail Freight Group (RFG), earlier today (24 March). The conference, held online because of the current restrictions, welcomed a ministerial address from the Scottish government’s transport secretary, Michael Matheson, and was hosted by RFG managing director, Maggie Simpson.

Alex Hynes, the managing director of ScotRail, speaking in his parallel role with Network Rail in Scotland, made clear his commitment to freight, by recognising that the passenger railway has contracted, probably long-term, and possibly permanently. The UK passenger service is running at 72 per cent of pre-pandemic levels, and carrying around 20 per cent of comparable passenger numbers, according to official figures. However, that represents a vast potential for a much larger freight railway, says Hynes. That is a potential that Scotland has yet to fully embrace, but there are moves in progress to meet increased demand.

In his address, the Scottish government transport secretary Michael Matheson alluded to the electrification programme already underway in Scotland. He said that advanced technologies, principally battery and hydrogen power, would play a part, particularly in remote areas where conventional overhead wiring may prove uneconomic. Noting that, Hynes raised the example of the Highland Main Line – a 200-mile (320km) spine connecting north and south Scotland – which is restricted in capacity but would clearly benefit from electric traction.

While the published plans from the Scottish government put the Highland route under the wires in future, those other parts of the network that may rely on battery or hydrogen power, would be put under scrutiny for compatibility with heavy freight operations. Recent timber trials were held up as an example of the potential for domestic traffic, but that traffic originated in the far north of Scotland, not scheduled for wiring. By contrast, the long-awaited private terminal for Highland Spring water, near Perth, was considered as an innovation of Scottish proportions that exemplified future rail freight operations. Advance fuels and traction are on the agenda at RailTech Europe in one week (register free here).

Capacity available at no cost

Scotland does, by several measures, under perform on freight operations, and it was wondered if the electrification programme outlined by the Scottish government would adequately address the projected future demand. According to the Office of Rail and Road, Scotland accounts for about 5 per cent of all rail freight in UK. Given that the county accounts for almost 10 per cent of population, and almost half of the landmass of the Great Britain, that may be considered as opportunities to expand. However, given that the passenger railway currently operates less than three-quarters of pre-pandemic passenger services and carries only a fifth of the passenger numbers prior to pandemic levels, there is capacity now available at less cost than previously envisaged.

Hynes noted that the rail industry, in common with the economy at large, would need to adjust to doing more with less – but the opportunity should not be overlooked that the rail network now has spare capacity available at little or no cost. Hynes made clear that the availability of road transport in the recent severe weather events, when the rail network struggled, was not something rail managers could be proud of. He noted that the main road route which parallels the Highland Main Line had remained open while the railway was closed. “That is down to management”, he said, and reflected that there was more to be done to ensure a robust railway for the future.

Hynes was however unequivocal in his celebration of what he called the Scottish rail freight success story. He said it had already removed removed 45 million road-vehicle miles (72 million km) and made many people aware that while they slept there were freight trains running that played a vital part in our economy. Hynes made several returns to the concept of continuous electrification as the means to fully exploit that freight potential. He called it a massive opportunity, even in areas that may not generate heavy freight flows. Hynes noted the rapid growth of light logistics and parcels. He said that the ability to schedule that class of in a mixed-traffic environment was much easier, especially on the long lengths of single track that cover the less populous parts of Scotland.

Maintaining the railway would remain a priority, said Hynes. What he referred to as the tragic accident at Carmont near Stonehaven last year was not to be forgotten. The massive opportunities for freight were being borne on the back of a Victorian railway, he said. Updating all of that network was an expense the country could not afford, so the challenge was to maintain it smarter, and build the best railway Scotland had ever had.

Why not take parcels on passenger trains like they used to do? There’s plenty of spare seats.!