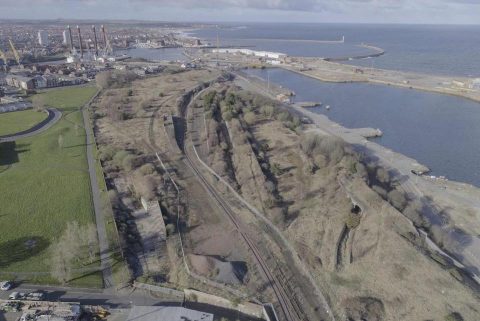 Bringing rail freight back to the River Wear and the Port of Sunderland has been a long and meandering journey. The first working in two decades was a multi-national affair for the English port, with Spanish and German collaborators among those involved. The story behind bringing the two kilometre connection back into revenue-earning service is a testament to determination.

The Port of Sunderland has completed its first loading of a commercial cargo train in two decades. The English port handled a load of steel coil for Spanish multi-national Marcegaglia, and German-owned DB Cargo UK transported the 1500-tonne load to the company’s Rotherham finishing mill. A multi-million pound rail infrastructure upgrade has made that possible. The opportunities for this north east of England port are a pointer to other long-forgotten facilities around the country, where active use has been left high and dry.

The task at the Port of Sunderland started over five years ago, says Ian Hughes, of Green Dragon Rail, the independent safety advisors who oversaw the health and safety case for the project. His involvement began with an excursion train, organised by the Branch Line Society (BLS), for which he assessed the line in 2015. “The Port still had its two Sentinel shunters on site at this time – Pinky and Perky. These were coupled together and run over all the railway to ensure the route was clear.” The excision ran in 2016, and from there, the possibility of heavier revenue-earning services were discussed.

Fast forward over the next two years, and with the investment of the local authority, Sunderland City Council, who are the port operators, there was a massive improvement of the infrastructure. “Old sidings designed for four-wheel vehicles were replaced with a 350 metre capacity loop and a high quality loading pad”, says Hughes. Lengthy testing followed, with DB Cargo running light engine test trains, and passenger operator Grand Central taking advantage of the branch line for driver training runs.

Hughes began training Port staff in late 2019. It is testament to the commitment of the Port that they took the long view, and brought staff up to speed more than a year ahead of revenue earning services. “The arrival of the first coil train was on 21 June this year,” says Hughes. “The second train was dealt with on 28 June, and the third left this Monday” (12 July). Hughes understands this has now moved to a regular monthly flow for Marcegaglia. “A fantastic achievement as it seems that the consignor has not used rail transport before”, he said.

Working alongside Hughes has been port director Matthew Hunt. “It is fantastic to see a commercial cargo train being loaded in the port again. This is something we have been working towards for some time and the team here have been working hard to have the port’s rail connections ready for such an operation.”

The steel coil trains, bound for Marcegaglia at Rotherham, are only the beginning. The Port team are hoping freight rail services could become a regular service as the multimodal hub develops further opportunities for the significant rail infrastructure already in place. Andy Foster, business development manager at the Port, said that there are other rail-related projects being considered. “The Port is ideally positioned to offer a range of rail related solutions, from cargo handling to the stabling and servicing of both commercial and passenger trains.

Foster points to the remaining infrastructure on the port branch line. “Our development of the former Hendon Sidings site to form the ‘Trinity – Rail, Road and Sea’ enterprise zone, demonstrates the significance of being able to offer a multi-modal approach to our business with a real focus on handling cargos safely, efficiently and with the environment very much at the forefront of all we do.”

Port of Sunderland continues to see growth. Cargo volumes are on the rise and shipping movements have been running at twice daily. Graeme Miller, the leader of Sunderland City Council and chair of the Port, is rightly proud of the progress. “The city council, alongside the North East Local Enterprise Partnership (LEP), have invested over GBP8 million (8.9 million euros) in road and rail improvements at the port in recent years and we are delighted to see this investment start to deliver. It also helps massively reduce carbon footprint, which is something we as a city are incredibly passionate about.”

Sunderland is already at the heart of the electric car revolution, with the massive Nissan plant, the biggest industrial employer in the region, just five miles (8 km) from the Port. Battery manufacture could soon have a much more significant footprint in the town too. All this is good news for rail freight, which is also being urged to electrify too.

Other ports nearby can benefit too

The industrial premises along the length of the short branch line cannot have failed to be impressed by the passage of rail freight traffic for the first time since the turn of the century. This short route to the port has more potential yet and Sunderland’s rail freight connection is on a rising tide.

“Anything that brings new traffic will consolidate the job prospects of the people working at the Port of Sunderland”, concludes Hughes. “That has to be a good thing for the employees their families and the wider community where they will spend their wages. The Port has invested heavily in its rail infrastructure and cargo handling facilities and has the capability to handle multiple trains and multiple cargoes in any given 24-hour period. The coils trains have proved the professionalism of the stevedore teams who have turned these trains round rapidly and safely.”

There are opportunities for increasing rail traffic at the Port of Blyth, and at Hartlepool, where traffic recently revived. 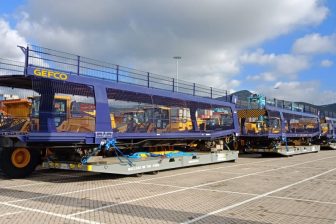 Gefco put up for sale by stakeholders RZD and Stellantis