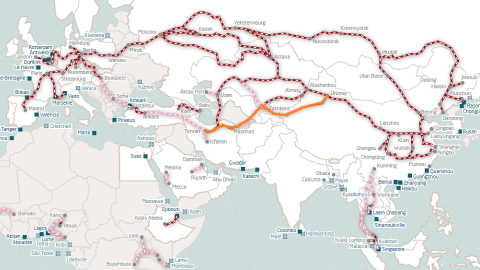 Trade logistics between Europe and China are dominated by big corporate players, while smaller players find it more difficult to get onboard. The New Silk Road Network is a collaborative association that is making it more possible for businesses to take advantage of international opportunities.

Multinational operators have been quick to take commercial advantage of the trade afforded by the fast developing rail routes between Europe, the Middle East and China. It has not been so easy for smaller players, until now. Bremen-based New Silk Road Network (NSRN) was founded to connect logistics companies of any size who are located and conduct business along the economic corridors of the Belt and Road Initiative (BRI).

“At the moment the main companies driving the new developments are mainly large conglomerates or state-owned companies”, says Ziwei Liu, one half of the partnership behind the network. “These involve the terminals, operators and platforms. However, particularly in Europe the main value is not generated by the big players but by a sizeable number of small and medium-size players, who account for the biggest total volume”.

However, the scale of operations, and the centralised organisation of the Chinese government, has not made it easy for New Silk Road entrants. Liu says she and her co-founder Alexander Hellmers have been working to make it more possible for independent entrants to take a stake in the market. “The fact that this product is controlled by big Chinese companies makes it less accessible in the market”, says Liu. “My co-founder Alexander and I have been to many events as the topic of Belt and Road is simply fascinating. It is one of the largest projects of this century”.

History may show that the BRI is the biggest concerted project of the century, but the ambition is such that it may prove too daunting for some. The New Silk Road Network has been formed to help overcome that obstacle to commerce. “Up till now, we have seen many individuals and organisations  and clubs try to make the BRI more accessible, but it still, remains quite abstract for the individual businesses”, says Liu, who specifically targeted those SME players who needed the strength of association to make the BRI work for them.

“While large companies already have their own offices locally to handle different regions, the same does not apply to the smaller firms. As with all logistics operations, they need the right contacts and partners in each country to be able to fulfill their clients needs”.

“Demand creates demand. In general, we see a 60/40 split in favour of the European side. In particular, the feedback so far from Germany, Poland, and Turkey have been great. This is not surprising given that the European companies are further from the source of the BRI, and are in higher demand of more transparency and information”.

With the Chinese government giving coordinated support to the BRI, there have been calls for better state initiatives from Europe. Much of the debate at the New Silk Road Summit in Venlo last November revolved around the lack of organised government-level action. Who do you call for the New Silk Road was a hot topic then and now. Read more from the Summit here.

“We believe that there should be a clearer stand and guideline for companies to reflect on, and more practical consulting should be provided”, concludes Liu. “As quite often, we see a rather short-term oriented and fragmented approach in Europe in general. China has the advantage of being able to enforce fifty-year development plans, and has the necessary finance to support this. “Our aim is to make the benefits of the BRI available to everyone, and in our belief this works best by giving companies the right platform, and also the incentive to be early adopters”.

The enforced reduction in trade, due to coronavirus has given some breathing space for independent operators to come into the market. Now might be a good time to do some New Silk Road networking.