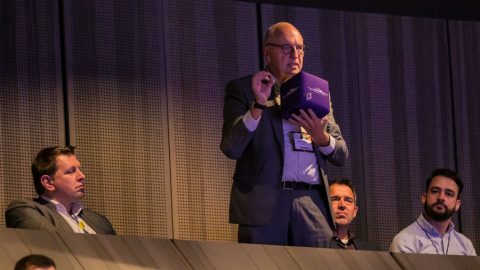 Who do you call for the New Silk Road?

A call for co-ordination, made at the recent European Silk Road Summit in Venlo, the Netherlands, brought to mind a classic problem for international trade with continental Europe. As Henry Kissinger once said, “If I want to speak to Europe, who do I call?” Now, who do you call for the New Silk Road?

During a well-attended session on the issues facing European freight hubs, delegates debated something that’s been on the international agenda ever since Henry Kissinger, the American diplomat, shuttled between crisis points in the Middle East: how to foster cooperation on the New Silk Road? Fortunately, solving world peace seemed easier than the logistics of rail trade between Asia and Europe.

The four hubs featured in the session – Zeebrugge, Luxembourg, Budapest, and Railgate Finland in Kouvola – not only stretch the geographical boundaries of Europe, but showcased the diversity of approaches, options and solutions available for transhipment operators, and the complexity of the issue. Without an intimate knowledge of Finland to Flanders, and everything in between, there is the potential for business to take the easy option, and dispatch loads by sea and air.

A solution, says specialist consultant Rob Brekelmans of Transforium Company Support in Tilburg (incidentally, another potential rail freight hub solution) might be a collaborative association, that could advise and act on behalf of hubs in Europe. “Finding that consensus is difficult,” says Brekelmans, with so many competing interests and local prestige at stake. “There is always the potential for the government agenda, evident right down to local level, to overturn the commercial agenda and make infrastructure decisions difficult. No one wants to invest in facilities if their future viability could be at risk because of a change in policy inside city hall.”

The concept of a ‘Silk Road Association’ divided the audience too. While there is already some co-operation evident – notably in the Scandinavian countries – a straw poll found only ten percent of delegates ready to back the idea of an overall association, with over twice that number opposed.

However, by far the biggest majority was undecided, suggesting to Rob that there are many more pressing issues to be addressed. “In India and Pakistan, for example, the concept of multimodal is still quite new, and there is a lot of development yet to come from that part of the world. Right now, there are traffic flows developing all along the Silk Road, and the market here in Europe is busy coming to terms with that growing level of demand. How the hubs handle freight forwarding and last mile delivery is changing too”, suggested a delegate.

Rob points to rail and road supported by the developing technology of drone delivery and even the typically Dutch solution of barge transport, as his quad-mode concept.

With the possibility of one of the biggest parts of the European market about to commit Brexit, there is uncertainty over the shape and future of many existing pan-European associations and institutions. The possibility of co-ordination on anything greater than single hub or even single nation seems the most likely interim solution.

A forum where all interests can come together to discuss areas of mutual co-operation and business development seems most likely to be the European Silk Road Summit for some time to come. With talk at the summit of changes in the Chinese hub strategy on the horizon, delegates for and against resolved to keep a finger on the pulse, with a call to reconvene at the Railfreight Summit in Poznan in May 2020, and the fourth Silk Road Summit in October 2020. The location, like the hub association debate, has yet to be decided.