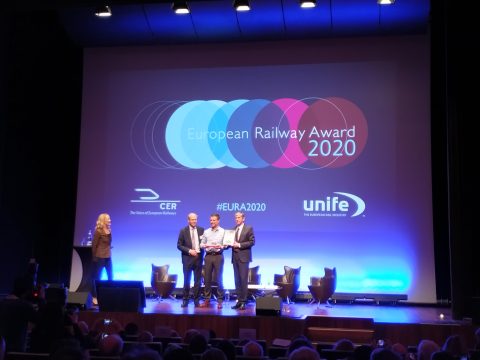 CEO Geert Pauwels of Lineas has won the European Railway Award 2020 on Tuesday evening in Brussels. The director received the award for the successful transformation of a loss-making division of the Belgian railways into a profitable private rail freight operator. Pauwels summoned the rail organisations present to seize the opportunity of the Green Deal to realize the modal shift in the coming ten years.

In 2009, Pauwels became CEO of the freight division of the Belgian NMBS, which was virtually bankrupt at that time. The division needed a transformation to survive. The company had a loss of 160 million euros in 2009 on a turnover of 340 million. “When I arrived, there was a lot of resistance to change. Nobody felt like it. We were dealing with the trade unions, politics and people who wanted to keep the status quo. But we couldn’t keep the status quo because we were heading for a bankruptcy.”

The CEO expanded the network of the rail transport company with the launch of the Green Xpress Network. This is a network of fast, direct, frequent and reliable rail links between economic centers in Europe. The Xpress products are used to bundle different types of loads, ranging from steel, chemical substances and consumer goods, to pallets and containers.

“We needed a really good product to convince the customer to make the shift from the road to rail. The quality of product we offered in the past, didn’t meet customer demands. Only with a good product a modal shift will take place,” said Pauwels. We will continue to pursue the modal shift in Europe and further expand our Green Xpress Network. We will help our customers to optimize their supply chain, with a positive impact on climate and mobility.”

CER director Libor Lochman addressed Pauwel at the award ceremony. “The successful privatization of Lineas, the innovative rail products of this operator and the clear vision on the modal shift are inspiring. Geert Pauwels has taken the lead in demonstrating the positive impact of rail, not only as a transport solution, but also as an answer to social problems such as climate change and traffic congestion. ”

Pauwels: “I am very proud. This is a recognition of the hard work of all our colleagues, the trust of our shareholder and the faith of our customers in what we do.”

When the award was presented, the Lineas chief executive called on decision makers inside and outside the railway industry to support the modal shift. “It has to happen now. We have ten years to make the radical switch to sustainable transport and to keep our climate goals in reach. Let’s seize the opportunity with the Green Deal to create the right context for the modal shift.”

“Let us reinvent the track and question the status quo in the transport world. Everyone who is here should support the objective of the modal shift: railway companies, infrastructure managers, policymakers, everyone. I hope that in 2030 rail will be the backbone of the European transport system.”

Lineas CEO: most people put on a suit, we take it off