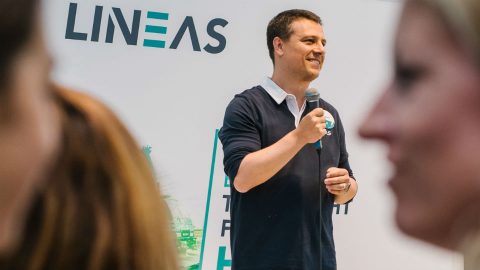 Lineas CEO: most people put on a suit, we take it off

Lineas does rail differently; with a fresh, new approach. This attitude not only stems from the innovative express network of its trains. When CEO Geert Pauwels showed up for this interview, he appeared in jeans and shirt, his outfit of the day at the Transport and Logistic fair in Munich. “Most people put on a suit for a business fair, we take it off”, he started off.

Under the leadership of Geert Pauwels the railway company has transformed from a surviving business to a market leader actively promoting the modal shift to rail. In 2008, Pauwels became responsible for the freight division of the Belgian NMBS, which was virtually bankrupt at that time. The division needed a transformation to survive.

In 2011 the CEO declared that the organisation was going through a profound restructuring in order to become a profitable, high-performing international logistics group, dynamic and customer-oriented. The strategy proved successful and in 2015, 69 per cent of the division was sold to the Argos Wityu fund, making it a private company. According to Pauwels, this was a crucial step in this restructuring period. With the following name change to Lineas in 2017, the company marked its new start as a dynamic independent player.

Today, the name Lineas cannot be missed from the modal shift debate. In Belgium, but also in the rest of Europe it is pursuing the ambitious goal to make transporting freight per train as easy as doing this by truck. The aim is to improve mobility by convincing companies to shift their cargo out of traffic onto rail. In order to fully utilise the advantages of rail, it developed the Green Xpress Network.

The Green Xpress Network provides direct connections between several European economic hubs. The connections are frequent, fast and reliable, some of the key factors of rail as a modality. The innovative element is however the combination of different types of cargo in one train. “We combine cargo as steel, chemicals or consumer goods and bundle it with intermodal cargo. Customers can easily add single wagons or containers to our open Xpress trains, we take care of the bundling with other cargo to create the necessary mass”, Pauwels explained.

In order to set up this network, the company had to take risks. The demand was not always there, and the supply of cargo was too scattered across Europe. But the company decided to carry this risk and establish certain connections against the odds, believing that the availability of the service would encourage the demand.

The trick worked. The reliability of the services convinced shippers to step on board. A good example is the service between Antwerp and Basel. The company transformed a declining volume of thirty single wagon-load trains per week into a fully occupied direct Green Xpress service. It now runs five times a week with a punctuality of 88 per cent.

And the concept is not only about long distances between major hubs, Pauwels adds. “We also have multiple shuttle services that bundle cargo from terminals, harbour docks or other sites. These volumes are then brought together in a hub to be put on our Green Xpress Network.” An example here is the three-point shuttle Rotterdam-Trier-Antwerp-Rotterdam. While the port of Rotterdam is predominantly an import harbour, the port of Antwerp has a focus on export. The shuttle supports these market needs.

While the first train connection outside Belgium was established in 2017 between the Netherlands and Germany, the Green Express Network now counts around 20 destinations across Europe. Most recently, it added the Italian port of Trieste to its network, from where multimodal routes can take the cargo forward to Turkey.

By 2020, Lineas plans to have around 30 connections across the continent. But more importantly, it wants to convince more shippers to make the step to rail transport. But this can only be done with the right combination of price, reliability, capacity and frequency, Pauwels notes.