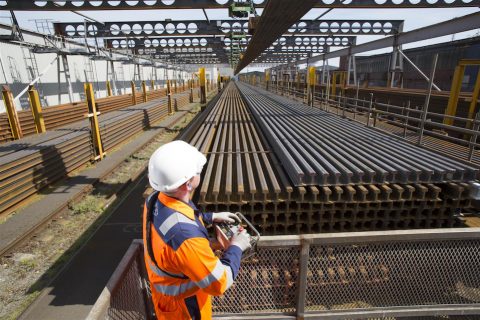 Re-railing Britain after the derailments

Two major freight derailments hit the UK network in January. Trains came off at Barking in London and Eastleigh on the south coast. You can read the latest updates here. With the incidents ripping up thousands of metres of rails, there are weeks of work ahead for the engineers. For Britain’s rail manufacturer however, it is all in a day’s work. Maybe even less.

Britain’s railway network owes a lot to Scunthorpe. The so-called industrial garden town may have a beauty spot named Central Park, but there is no escaping this is a steel town with the steel works being virtually as large as the town itself. The British Steel site produces the majority of rails used in the UK and hosts its own 100 miles (160km) of private rail network delivering mile after mile of rail from its near mile long (1600m) production plants.

Hotline to the rail man

The rail specialist at British Steel, Daniel Pyke, like many learned of the freight derailments at Barking and Eastleigh via RailFreight.com and social media shares. Bad news travels fast. It is not unknown for Dan’s phone to be a hotline for rail advice. With his handset hot to the touch, he gave RailFreight.com the inside track on the biggest rail stockpile in Britain.

“There are two long rail welding plants and stock areas in the UK”, says Pyke. “There is one here at Scunthorpe owned by us, the other at Eastleigh owned by Network Rail”.

Yes, the southernmost of the locations where the rails were ripped up was indeed next door to the vast rail stock yards that usually serve the south of the UK. It has even been a source of some black humour at the British Steel Scunthorpe works – a much needed distraction from their current business challenges.

Given the nature of the derailment locally, it will take some planning to get rail stocks replenished. “Both Barking and, naturally, Eastleigh will be supplied with new rails from the Eastleigh yard”, says Pyke. “We supply the majority of the rail from Scunthorpe to Eastleigh at 108m in length where it is stocked, welded to 216m lengths and distributed to installation sites”.

Logistically, the Barking project will require 39 lengths of rail at 216m each. That is something like 475 tonnes of rail, “assuming it is 56E1” says Pyke, for whom technicalities are everything. Quality counts, but availability is important too. “The two delivery trains were actually scheduled to come from Eastleigh before the derailment there”, he says. “Thankfully operations were not affected I have been told”.

In terms of response to the sudden rail demand, the Scunthorpe operation is in pole position. “As a local supplier with substantial stocking facilities it is certainly something to which we are best placed to respond”, says Pyke. “Part of our contract with Network Rail involves stocking rails for them, so they are ready for use at short notice. A non-domestic supplier would need weeks to schedule long length rail deliveries into the UK, with additional welding and possible trans-shipping onto the rail delivery fleet trains so they can be delivered trackside. We can offer the same service at hours of notice rather than days, weeks or even months from some suppliers. We are an integral part of the supply chain with rail availability consistently above ninety-nine percent”.

All in a day’s work

The scale of operations at Scunthorpe is put in perspective by the speed with which they can react to the demand. While Network Rail and engineering contractors are left with weeks of work to replace something like 4km of track, Scunthorpe can have that quantity of finished rail ready to go in less than a day. “In terms of production volumes the 39 rails is much less than we make in a single eight-hour shift”, says Pyke. “So even if our stocks were at zero, which does not happen, we would still be measuring response times in hours rather than days, should even the worst happen”.

Certainly it is hard to imagine a scenario worse than 4km of rail ripped up unexpectedly, but for Pyke and British Steel at Scunthorpe that is all in a day’s work. They are hard at work again right now. Regular replacements and scheduled maintenance, together with new orders mean the mills do not sleep. While ready to respond, Pyke would not mind if his phone did not ping unexpectedly bringing messages of woe, for a while at least. Though they do say things come in threes.