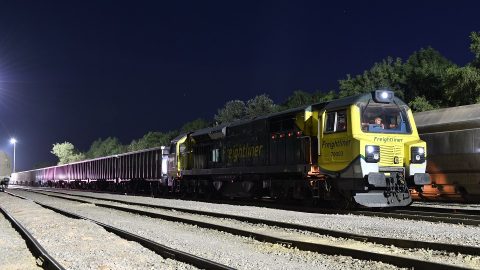 British rail operator Freightliner, a subsidiary of Genesee & Wyoming (G&W), has successfully hauled a train weighing 4,624 tonnes. It has become the heaviest jumbo train in the UK. The trial transportation of aggregate between Merehead in Somerset and Acton in London was performed for Mendip Rail in four hours.

The test run was carried out in the early hours of 17 July. To haul 4,624 tonnes, Freightliner used the Class 70 locomotive with 3,690 horsepower. This type is the most powerful vehicle in the company’s fleet. Freightliner operates 19 locomotives of Class 70. It intends to use them in the hauling operations for Mendip Rail. “Under the Mendip contract, Freightliner will haul an expected eight million tonnes of aggregate per year. Therefore it was crucial that we tested the maximum haulage capability, using one of our powerful Class 70 locomotives and demonstrating our commitment to providing a safe and efficient service to our customers”, said David Israel, Bulk Commercial Director for G&W’s UK/Europe Region companies.

Freightliner was established in 1995 after the privatisation of the intermodal division of Railfreight Distribution, part of state-owned British Rail. The company provides activities in three areas: intermodal operations, bulk haulage and maintenance of rolling stock. Its fleet includes four types of locomotives: Class 66, Class 70 (PowerHaul), Class 86 and Class 90. Freightliner owns subsidiaries in Poland and Australia. In 2015 the British group was acquired by G&W. Freightliner Group is the UK’s largest rail intermodal operator and the second-largest freight operating company after DB Cargo UK.