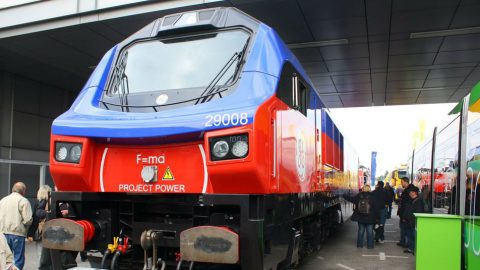 All the locomotives will be produced in Turkey at the facilities of Tülomsaş, local partner of General Electric. Terms of delivery as well as the purchase value have not been disclosed.

“We are honored to expand our strong presence in Turkey and become the preferred locomotive supplier to both state-owned and private operators. This agreement represents a significant milestone to support a dynamic, growing market and we are proud to contribute to Turkey’s railways industry development goals with our technologies and experience,” said Gokhan Bayhan, GE Transportation’s General Manager for Russia/CIS, Europe, Middle East and North African market.

Körfez Ulaştırma is one of the only two open access operators in Turkey. It is part of Tüpraş Holding, which owns refineries in Izmit and Kirikkale. The main specialisation of the carrier is transporting oil and petroleum products on the Kirikkale – Ankara – Izmit railway line in northwestern Turkey. Rolling stock of Körfez Ulaştırma consists of five diesel locomotives being rented from TCDD Tașimacilik and 491 own tank cars.

Körfez Ulaştırma was the first private company to receive license for freight transportation in the country in August, 2017. However, it started operations only at the beginning of this year. Therefore, the title of the first open access railway freight carrier goes to another company – Omsan Logistics. This operator carried its first cargo mid-December 2017.

Liberalisation of the Turkish railway sector continues to progress. The two open access freight operators together hold a market share of ten per cent. This amounts to circa 2.8 million tonnes of freight. The predominant role in the transport of cargo still plays TCDD Tașimacilik, a state-owned railway company. The liberalisation process started in June 2016, when TCDD was divided into two enterprises: one for the railway services and another for maintenance and modernisation of railway infrastructure.

GE is not a newcomer to the Turkish market. In 2008, the manufacturer signed an agreement with Tülomsaş, a Turkish rolling stock manufacturer for producing of the locomotives. The first Turkish PowerHaul was completed in 2011.

Currently, the Powerhaul locomotives run in the United Kingdom, Turkey, South Korea and Australia. They are equipped with a technologically advanced 16-cylinder 3,700 HP GE PowerHaul P616 engine with common-rail fuel injection. The locomotive can achieve maximum power output, while providing an 18-percent reduction in fuel consumption. The first PowerHaul diesel locomotive was completed in 2009 for Freightliner, British freight and logistics company.