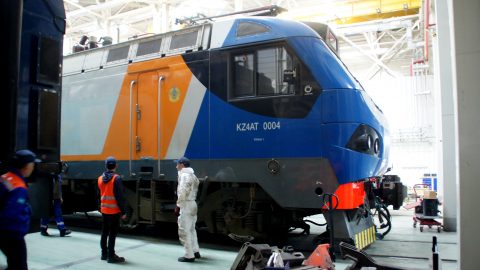 Due to the huge infrastructure developments in Kazakhstan and the growing volumes of freight transported over the rail network of the country, the demand for rolling stock is also on the surge. The French train manufacturer Alstom won a large order in 2010 for the delivery and maintenance of 200 electric freight locomotives (KZ8A, consisting of two parts) and 95 electric passenger locomotives (KZ4AT) to Kazakhstan Railways.

To meet the growing demand in this market and to be close to the customer, Alstom opened the EKZ plant in December 2012 in the Kazakh capital Nursultan (formerly Astana). Due to its central location in Central Asia, this already housed two maintenance and repair centres, from where it serves markets in neighboring countries.

The EKZ factory consists of five different workshops for welding, painting, cabling, assembly and testing. It also includes a workshop where on-board transformers are assembled. These are not only used in the locs that come from the factory, but are also supplied to the international market. The EKZ locomotive factory will reach the maximum production capacity of 100 locomotive units per year in 2020. Currently, the work is done in two shifts by around 530, mostly local employees. In 2020, the location will be operational 24/7 and create around 700 jobs.

The Alstom freight locomotives can reach a speed of 120 kilometers per hour. Due to the extreme weather conditions in Kazakhstan, they are designed to handle temperatures ranging from 50° C to -50° C.