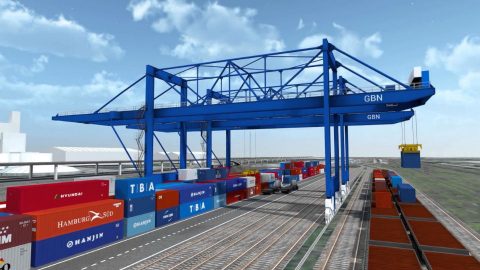 Gateway Basel Nord is a new, trimodal transshipment terminal at the intersection of rail, Rhine and road, aimed to enhance the efficient handling of import/export freight traffic. The project is implemented by Gateway Basel Nord AG (GBN), a joint planning company consisting of Contargo, SBB Cargo and Hupac, in cooperation with the Port of Switzerland. End 2015 GBN submitted an application to the Federal Office of Transport for the construction of the infrastructure. The financial commitment marks an important milestone in the realisation of the national container handling center.

Switzerland is expected to witness a growing demand in combined transport services. In order to meet this demand, GBN aims to expand throughput capacity with improved productivity across all transport chains in Basel North. The new terminal will have a high degree of automation and three gantry cranes for trains up to 750 metre. The terminal layout increases efficiency, speeds up turnaround times, and results in savings that can reduce the cost of import-export shipments.

The terminal should also enable a shift to rail. In addition to road access to the A2, the terminal will have a rail connection, allowing direct train access from the north and south, including access to the Rhine-Alpine corridor with the Gotthard Base Tunnel as the centerpiece. The aim is to realise a gradual shift of container traffic to rail, moving to a 45 per cent market share in the first stage, and later to 50 percent.

By the end of 2020, Gateway Basel Nord will be put into operation. It is anticipated that in 2023 the Swiss Rhine ports will be able to expand to the trimodal terminal with the construction of the harbor basin 3. This will allow direct transhipment between road, rail and ship, which will further increase the terminal’s efficiency. The federal government already pledged its financial contribution for the construction of the new harbor basin last September.

Currently, the merger control procedure is ongoing and expected to be completed this summer. This should facilitate the transformation of Gateway Basel Nord AG from a planning company into an operating company. The building permit can be expected beginning 2019, after which construction can commence.