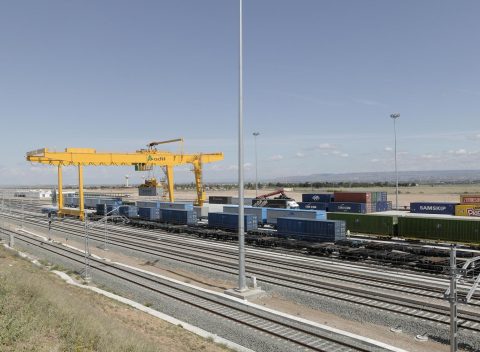 Portuguese rail freight Company Medway and Spanish carrier Renfe Mercancias are preparing a new service between Cordoba, in the Spanish region of Andalusia, and the Portuguese port of Sines. This service will have stops in Seville, 133 kilometres south of Cordoba, and Merida, in the eastern region of Extremadura and close to the Portuguese border.

This service will carry sea containers andbe focused on agricultural and manufacturing products produced in Andalusia and Extremadura. The final stop would be Sines, close to Lisbon, and a key logistics hub. Initially, there would be one weekly service, increasing the frequency under demand.

The regional Andalusian government is claiming for civil works to improve rail freight connections of the mentioned Spanish port due to the increasing competition of the Portuguese ports of Leixoes, Sines and Setubal, and Tangiers in north Morocco. Andalusia and Extremadura have reinforced their international trade traffic since the last Spanish economic crisis and their farmers and manufacturers are demanding more efficient intermodal transport services, forging a stronger relationship between Spanish and Portuguese ports.