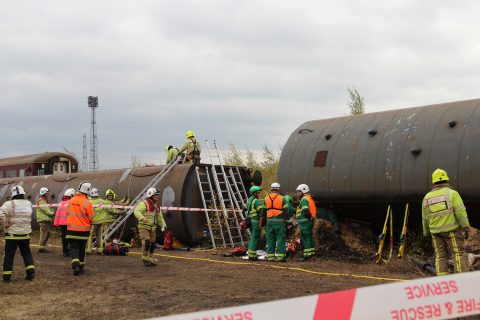 DB Cargo UK has played a central role in a multi-agency exercise to stage a simulated train derailment by hosting the event at one of its northern England sites. A locomotive and several carriages were used in the three-day event at its Healey Mills site in Wakefield.

The rail freight operator worked with agencies including Network Rail, British Transport Police and Yorkshire Ambulance Service to recreate the scenario on an unused track. It provided an invaluable practical training exercise and showcased Healey Mills as an ideal site for future training opportunities not only for DB Cargo but other freight companies and the emergency services.

As part of the exercise arrangements were made for a locomotive and out of service rail carriages to be placed on the track, where one carriage was also completely overturned. The 140-acre site was once one of the UK’s most important and well-known freight railway locations before its closure in 2012, since when it has been out of action.

Volunteers from St John Ambulance, the UK’s most well-known first aid charity, acted as trapped, injured and missing casualties, and dummies were used to replicate individuals stuck under the carriages and fatalities at the scene. The exercise was also attended by West Yorkshire Police, The Office of Rail and Road (ORR), Department for Transport (DfT) and the Rail Accident Investigation Branch (RAIB).

Dave Jenkinson, DB Cargo UK Safety Assurance Manager Healey Mills, said:  “The successful delivery of the project has showcased Healey Mills as an ideal location for future training exercises as we can re-create a number of different emergency scenarios.

“West Yorkshire Fire and Rescue Service and the other parties involved were very pleased with the facilities provided and will be using the site again in the future. We are proud to be able to provide such invaluable training opportunities at Healey Mills.”