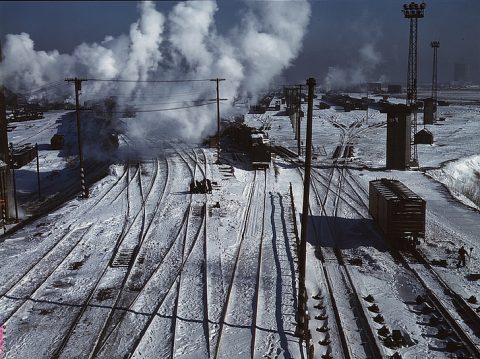 While the Lunar Year has officially kicked off and the people in Europe have left their holidays behind, we are finding ourselves in the midst of winter. In Kazakhstan and some parts of China, this means -20 degrees Celsius, hard winds and snow. How does the China-Europe Express cope with these extreme weather conditions?

If you check the weather right now in Dostyk or Khorgos, where most of the trains from China pass, it is already milder than last week: -16 degrees and sunny. Last week, it was -20 degrees and less sunny. What remained is the harsh winds: today at a maximum of 15 miles per second, and this is considered mild. According to the Dutch weather forecaster KNMI, this wind is ‘hard to walk against’.

But in Kazakhstan, they are used to it, explains Sadvakkas Seitzhanov from KTZ Express. “People are working on the ground, and they have always done so. We don’t know any better than that we have a strong winter, from October until April. And the trains need to keep running, people in Europe need their goods.”

Although the trains do not stop running, there are some limitations. The strong winds are considered by many to be the biggest challenge, as it makes the stacking and loading of the containers a risky job. “Sometimes, the wind is so strong that containers can fall when they are stacked”, said Bakhyt Yerzhanov, CEO of IT developer Networks Energy, a company that wants to digitalise the customs procedures at the border.

According to Seitzhanov, there are specific procedures for the fastening of the containers when there are hard winds. The loading may also take a little longer than usual, causing some delays, he explains. But, we are talking about a few extra hours or a day, not weeks or months.”

But according to New Silk Road Intermodal, a Chinese logistics company, the current weather conditions have led to delays and a snowball effect is to be expected, with delays of 5-7 days later in the month.

Reporting the situation in week 3, the company writes: “At Alashankou and Dostek on the Kazakhstan-China border, the temperature dropped by more than 20 degrees Celsius, the strong wind reached Force 12, the visibility decreased, and the loading capacity of the station was weakened, resulting in the delayed arrival of multiple trains. In addition, many trains were forced to strand along the way.”

As a lot of cargo is currently on hold at the terminals, other trains will be postponed. “Affected by this, many chartered trains to be dispatched in January will be gradually delayed to February, and many goods will be waiting for arrival in the yard outside the station”, the company says.

On the positive side, the backlog may be be cleared sooner than later considering the Chinese holidays related to the Lunar New Year. The first day of the Chinese New Year was Sunday 22 January, and the first seven days are considered a public holiday (22–29January). However, many people extend this holiday to a total of sixteen days. This usually results on lower production outcome and limited first and last mile activity.