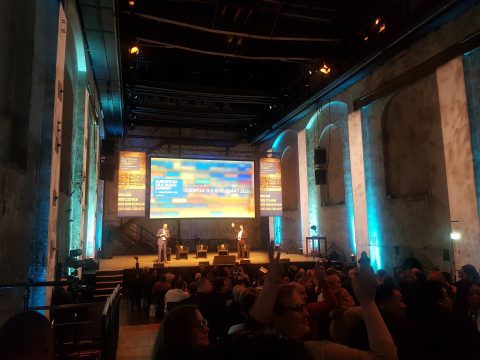 15:30 ~ It is officially a wrap, the European Silk Road Summit 2022 in Duisburg is over. Now the attendees can enjoy a couple of networking drinks. Thank you everyone for joining us, whether in person, online, or following the live blog.

15:25 ~ It is now time for the highlight of the event. The Silk Road Ambassador is about to be rewarded. The winner is Thomas Kowitzki from DHL Global Forwarding.

15:19 ~ Now it’s time to check in with our fellows at the port of Rotterdam for the Port Debate. 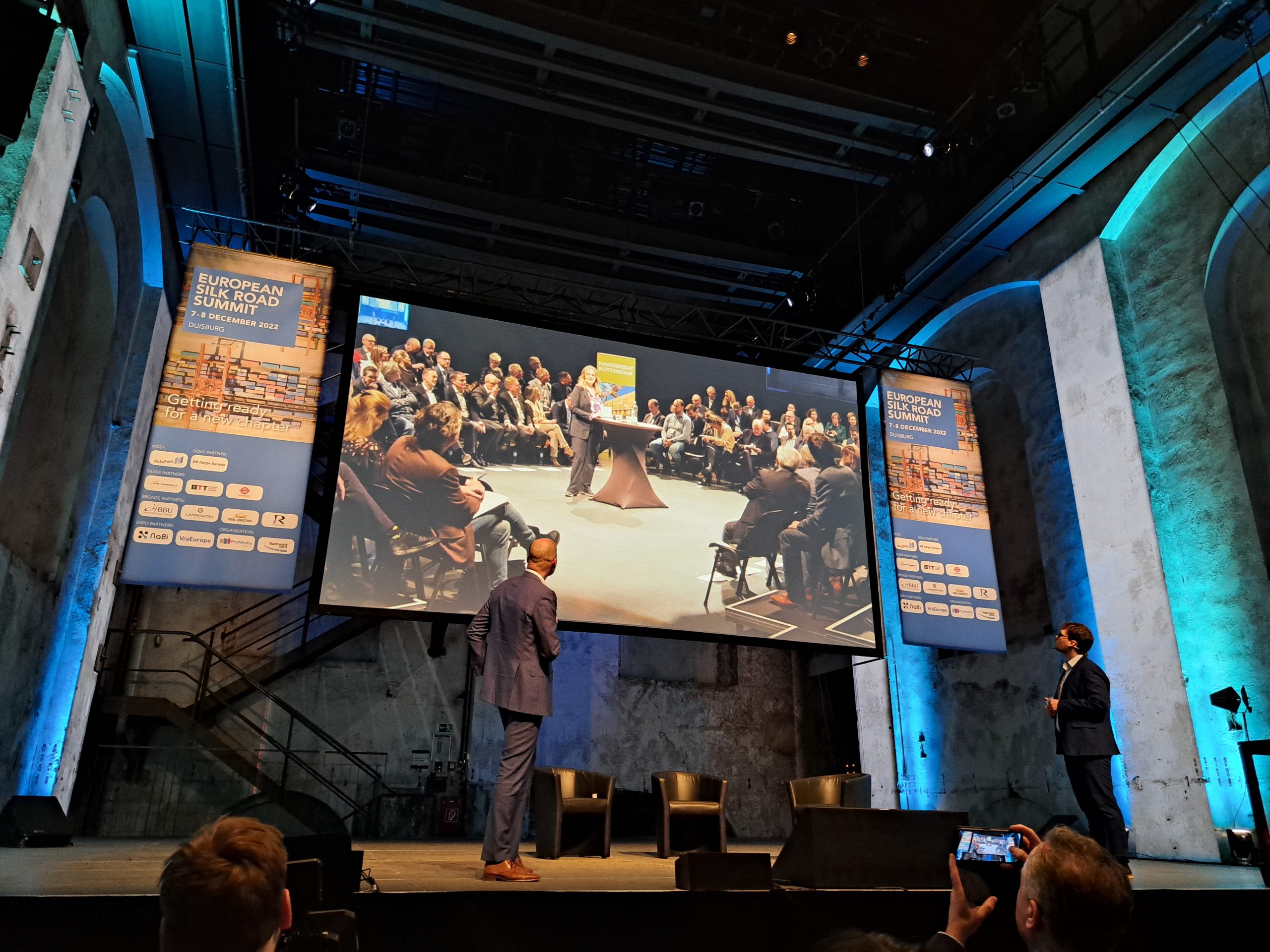 15:05 ~ It is now time for the first surprise of the day. Real Logistics will host a small lottery to award three lucky attendees with a prize.

15:04 ~ Before considering whether or not the data is reliable, the speakers point out that technology needs to be applied on an efficient system, otherwise it will only amplify the inefficiencies.

15:00 ~ As reliable as data is, the speakers pointed out that if tracking data technology fails, cargo can get lost.

14:55 ~ The last presentation for Session V will be held by Bence Kovacs and Geza Szayer from General Mechatronics, who will expand on the role of technology in the rail freight industry.

14:50 ~ ViaEuropa’s technology comes in handy especially when you have a variety of different cargo on trains, as is often the case for e-commerce. All processes, including customs service, are in fact automated.

14:48 ~ In order to fix congestion, Via Europa does not keep goods in the warehouse too long. As Streefland mentioned, goods that come into the warehouse are processed on the same day and sent to Amazon warehouses.

14:42 ~ Bram Jan Streefland from ViaEurope will now offer his insights on the recent developments concerning e-commerce.

14:39 ~ The biggest problem in Chengdu is that there are delays in departures, but Real Logistics claims they can offer transit times of 14-16 days.

14:34 ~ One of the issues mentioned by Moskala is that they cannot transport dangerous goods from China.

14:28 ~ Real Logistics embraced LCL cargo from China after setting up an office in Chengdu right around the time the COVID-19 pandemic hit.

14:16 ~ Governments and institutions should push harder to use the rail. “It’s now or never”, he added. China, for example, is far ahead compared to Europe in building high-speed tracks.

14:13 ~ Verbraak pointed out that the world needs a new energy system, since producing electricity is not always a green process.

14:10 ~ Roland Verbraak from BTT is now on stage to talk about sustainability.

14:05 ~ The ambition is to have a solid corridor between two points. VTG is now focusing on the Shanghai-Duisburg corridor. It has already launched the westbound train, and it is now working on the eastbound service.

14:00 ~ Running trains with chemicals and liquid cargo is all about trust and a bit of education says Wehlen. Liquid and chemical cargo is the specialty of VTG. Many things can be done, the expert explains.

13:56 ~ Session V is underway. The first speaker will be Hendrick Wehlen from VTG, who will discuss the transportation of liquid cargo on the New Silk Road.

13:42 ~ Session V will commence in a few minutes. During this session, five experts will each give a short presentation on various topics, including liquid cargo, e-commerce, and LCL distribution.

13:00 ~ Rawlinson pointed out that rail would offer significantly shorter transit time compared to road or ship from Asia to Europa, mentioning that Central Asia is the last available market for containerised goods.

12:57 ~ One of the current issues in the market is the too-prominent role of government when it comes to rail freight and rail infrastructure. More private enterprises would help the industry, according to Rawlinson.

12:55 ~ He said that 15-20 per cent of goods exported from Central Asia can be put in containers and therefore on trains. On the other hand, for imports, only less than 3 per cent of cargo can be containerised.

12:50 ~ The terminal in Aiud, on the other hand, will help DP World in establishing fixed-timetable trains.

12:49 ~ The new terminal in Dornesti was planned because the port of Constanta became quite congested with goods coming from Ukraine after the war started. Transit time from Constanta to Dornesti is 36 hours.

12:48: If Romania is allowed to enter the Schengen area, there will only be the necessity to carry out customs services once, only at the port of Constanta.

12:45 ~ One of the most important factors is Constanta, which will have two more terminals sooner rather than later, one for Ro-Ro cargo and one for project cargo. The facility is very close to the Danube canal, which leads all the way to Duisburg.

12:41 ~ Alexandru Craciun will take the stage once again, this time by himself, to discuss how Romania can connect Asia with Europe on the Middle Corridor.

12:39 ~ Both speakers agreed on the fact that they do not see each other as competitors, but rather as collaborators when it comes to New Silk Road.

12:36 ~ Regarding COSCO’s exit from Duisburg, Schwarz calimed that it did not have any negative impact on the inland port.

12:34 ~ Schwarz claims the Duisburg became the biggest NSR hub for China thanks to its ideal location.

12:33 ~ She claims that COSCO was already one of the largest customer for CTT and that it is quite normal for shipping companies to do such investments.

12:31 ~ The negotiations between COSCO and HHLA for the Container Terminal Trollerort are not closed yet, as Gurries highlighted.

12:30 ~ She pointed out that most of the trains from China often have cargo heading to both Hamburg and Duisburg, therefore it is not correct to talk about competition between the two.

12:27 ~ Gurries mentioned that volumes have been slightly increasing since the summer, when it comes to rail freight at the port of Hamburg. However, many companies told the port they are not ready to rejoin the NSR.

12:25 ~ Now, Inga Gurries, Christoph Schwarz, respectively from the port of Hamburg and Duisport, will take the stage to discuss the role of German ports.

12:12 ~ One of the disadvantages of the Siemanowka – Svisloch border crossing is that around 155 kilometers of the westbound line to Siedlce is not electrified.

12:08 ~ Ostrowski underlined that only three out of five border crossings between Belarus and Poland are being used, and only two provide a good reloading infrastructure.

12:06 ~ Thomaz Ostrowski from Andrex Logistics is on stage to discuss the role of Poland and Belarus’ borders on the NSR. He confirmed that volumes have significantly decreased, around 30 per cent, especially when it comes to Kaliningrad, where volumes have almost disappeared.

12:00 ~ Session IV is about to start. First, there will be a presentation from Thomaz Ostrowski on the role of Poland on the New Silk Road. The following presentation will be held by Inga Gurries and Christoph Schwarz on the role of German ports. Around 12:15, Alexandru Craciun will take to the stage again to how Romania can connect Asia with Europe on the Middle Corridor. Session IV will close with Iain Rawlinson’s insights on Georgia and Central Asia.

11:28 ~ According to him, we should use the plural term New Silk Roads, so that people can understand it is not only one route.

11:21 ~ According to Forough, the United States are focussing too much on geopolitics, while China is attracting partners, including countries that are openly allied of the US.

11:20 ~ One of the issues pointed out by Forough is the so-called global bifurcation, which led the US and China to cut ties during the Trump administration in 2018. However, for the past ten years, China trade with both the US and Europe reached record-breaking figures.

11:16 ~ Mohamad Forough from Giga Hamburg will now give the last presentation of Session III in which he will analyse global geopolitical shifts and how they are impacting the industry.

11:09 ~ Cao pointed out that it is time for every European logistics and rail freight company should reflect on their needs to improve the supply chain.

11:07 ~ Craciun talked about how the Romanian government tried to create a partnership between countries in the area. Moreover, he claimed that a lot of railway companies are owned, or partly owned, by governments, therefore their involvement is necessary.

11:02 ~ Kowitzki talked about how the industry needs to realise that rail freight does come at a cost and has to sell itself as a product. That is why subsidies are considered as a must by many players in the industry. On the other hand, Cao pointed out that communication among countries is more important than subsidies.

10:55 ~ Kowitzki pointed out that high speeds are important, but service reliability should come first.

10:52 ~ Bottlenecks and reliability are the main challenges, according to Cao. Craciun pointed out the the need for capacity upgrades should be among the main focuses on the New Silk Road.

10:50 ~ New corridors and new commodities have been identified by Parlagashvili and Kowitzki as the main opportunities for the New Silk Road.

10:45 ~ The second panel session of the ESRS is about to commence. Maia Parlagashvili (Maersk), Thomas Kowitzki (DHL), Alexandru Craciun (DP World), and Guanzhe Cao (Duisport ) are going to discuss the resilience of rail freight.

10:39 ~ It is now time for our third video from Chinese experts that will go over the Chinese companies’ experience the geopolitical developments. More specifically, they will shed more light on how the war in Ukraine impacted their businesses and challenged the New Silk Road.

10:29 ~ Schwilling doubts that the Middle Corridor will become significant with traditional Eurasian flows.

10:27 ~ Other countries along the NSR cannot fulfill the same role as China, Schwilling pointed out. India is not the ideal rail freight destination also because of geopolitical tensions between India and Pakistan.

10:24 ~ According to Schwilling, China will not stop granting rail freight subsidies in the future. He is also debating different case scenarios according to the different possible developments of the geopolitical situation. The only way to go back to 2021 volumes would be the end of the war in Ukraine. Schwilling claims the Middle Corridor cannot handle the volumes transported via the northern route through Russia.

10:19 ~ Transit time and transportation costs are still too high, including on the Middle Corridor. This is mostly because shipping rates have drastically dropped throughout 2022.

10:17 ~ Andreas Schwilling approached the stage for his presentation concerning volume developments and corridor perspectives under geopolitical influence. As he mentioned, volumes dropped about 30 per cent, perhaps even more for rail freight companies active on the New Silk Road.

9:51 ~ Session III of the ESRS is about to kick off with Andreas Schwilling which will discuss volume development and corridor perspectives under the current geopolitical influence.

8:50 ~ Day two of the European Silk Road Summit will begin in a little over one hour. It will start with Session III, which includes a presentation from Andreas Schwilling from the Roland Berger Institute. After that, there will be another video from Chinese experts on how China is dealing with the recent geopolitical developments. After that, Maia Parlagashvili (Maersk), Thomas Kowitzki (DHL), Alexandru Craciun (DP World), and Guanzhe Cao (Duisport ) will take part in the second-panel session of the event, discussing the resilience of rail freight. The session will end with a presentation from Mohamad Forough from Giga Hamburg.

6:30 ~ Good morning from Duisburg! This is the live blog of the second day of the European Silk Road Summit. Here you can follow in real-time the discussions taking place at the event. The ESRS kicks off at 10:00 and lasts until 15.25. At the end of the day, the Silk Road Ambassador 2022 will be announced, so stay tuned.

Here you can read the live blog of day 1 of the summit.