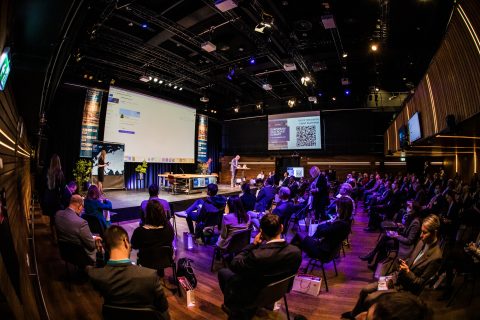 17:03 ~ And that was a wrap for today. Thank you all for staying with us, come back tomorrow for the live blogging of day two of the European Silk Road Summit 2022.

16:56 ~ One of the main problems in Ukraine is that the infrastructure is old and poor. Another issue is time lost for customs operation between Ukraine and the EU.

16:52 ~ To end day one, Yuriy Krasovskiy will talk about the future of Ukraine in the context of the New Silk Road.

16:44 ~ For eastbound trains,there was a decline in the transportation of most commodities. However, commodities such as powder milk are being diverted from air freight to rail freight, mostly because flying over Russia is not always possible anymore.

16:41 ~ Westbound trains have seen increasing volumes from the chemical sector being shipped from China to the EU.

16: 39 ~ Zhang highlighted that volumes did decrease throughout the first three quarters of 2022. However, it looks like thy are coming back, thanks to new commodities being shipped both westbound and esatbound.

16:37 ~ After insightful participation from the audience following Tang’s presentation, Ganyi Zhang from Geodis will now take the stage and talk about the reconfiguration of the China-Europe Market.

16:28 ~ When it comes to opportunities, Tang pointed out that joint efforts from the countries involved are necessary to build infrastructure and expand capacity. The option of transporting battery cargo, in addition, is opening up a new market for the rail freight industry.

16:24 ~ CEVA is quite active on the Middle Corridor thanks to its container availability and secured capacity. However, there are challenges too. For example, longer transit times compared to routes via Russia. Transiting on the Middle Corridor is also 30 per cent more expensive than crossing Russia. Moreover, congestion in strategic locations such as Baku, Aktau, and Constanza is also creating bottlenecks.

16:20 ~ Kelvin Tang will now have the floor to further discuss the role of the Middle Corridor as an alternative route on the New Silk Road for CEVA Logistics.

16:10 ~ It is now time for the second video from Chinese experts. In this video insights form the Chinese industry on the Middle Corridor, cargo decentralisation, and transporting electric vehicles on rail are presented.

16:05 ~ To wrap it up, all the speakers talked about the importance of in-person communications and relationships with partners and customers. Moreover, having headquarters in China is considered by all speakers as a significant advantage and something to further develop for non-Chinese companies.

15:58 ~ Seithanov underlined that both the Middle Corridor and the UTLC route should be developed, without only choosing one over the other. The future of UTLC, however, is tied to the geopolitical events that are currently occurring.

15:49 ~ The panel is discussing the role of Duisburg as a hub in the New Silk Road and the fact that Poland might replace the German city. However, Lars Wich-Kuhnlein claimed that Duisport should not be significantly worried, considering transit times from China are still very competitive.

15:46 ~ Leuschner highlighted that negotiations for subsidies with EU governments have been ongoing since 2011 but did not show the results the industry hoped.

15:43 ~ When asked about preparations for next year, Monika Olejniczak said that transit time is their main concern to offer a valid product. Moreover, more subsidies are needed to solve the issue of eastbound trains, which are often less than eastbound ones.

15:40 ~ Dimirtij Hasenkampf stressed as to reach the goal of having “green logistics” governments need to support rail freight companies. However, he seemed pessimistic about the efforts coming from the European Union.

15:37 ~ All the panelists agree that 2022 was somewhat of a turbulent year, despite still being satisfactory. Sadvakkas Seithanov pointed out that the price to run through Kazakhstan will remain stable in 2023. According to him, the focus should be on boosting the Middle Corridor.

15:32 ~ It is now time for the panel discussion. Monika Olejniczak, Dimirtij Hasenkampf, Sadvakkas Seithanov, and Lars Wich-Kuhnlein will host a panel discussion on the current market outlook. The session will be co-moderated by Uwe Leuschner. 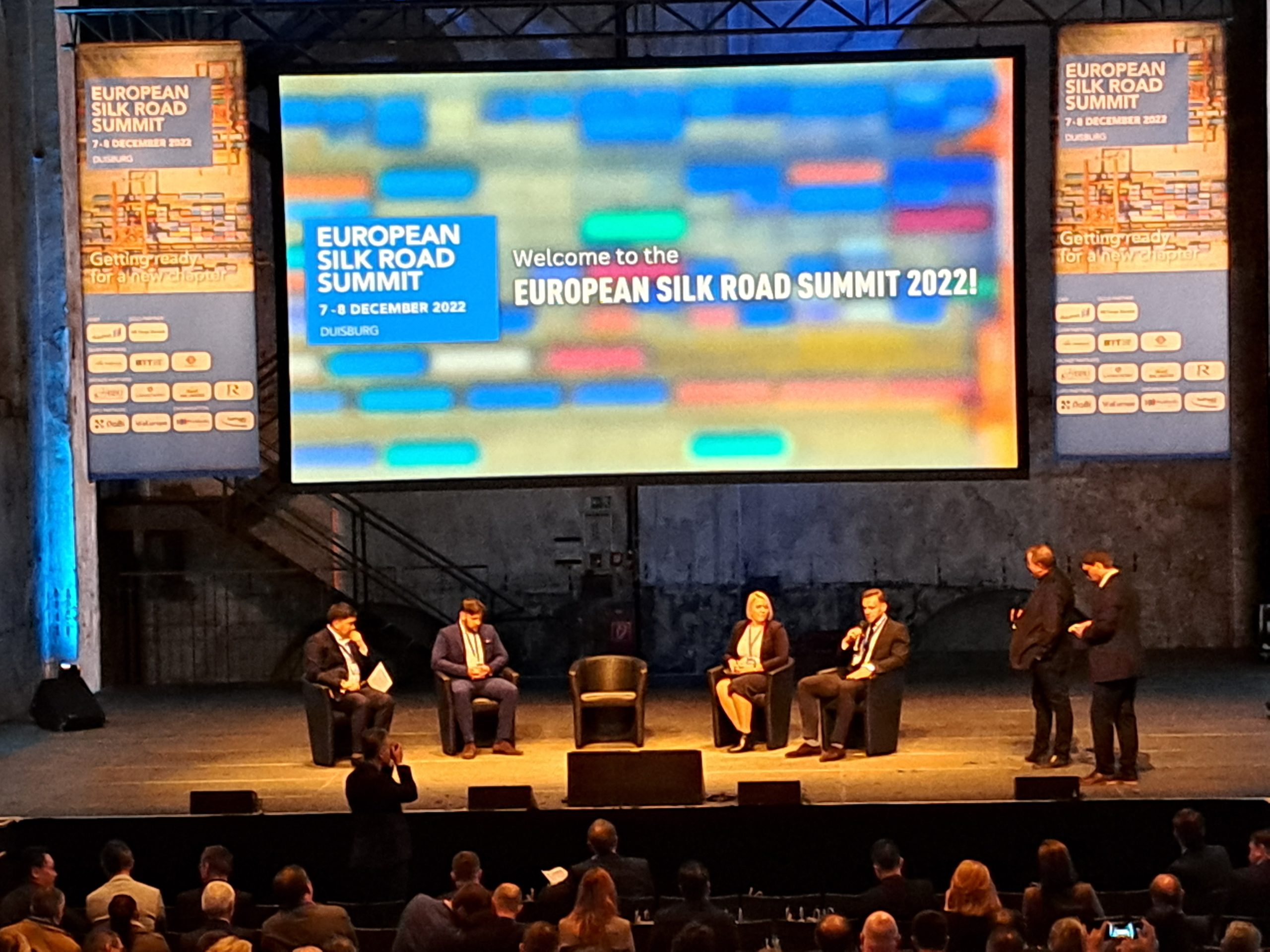 15:26 ~ From the video, it is understandable that, for some Chinese companies, Russia has become the new biggest partner replacing Europe, since the beginning of the war in Ukraine. Moreover, increased prices to travel through Kazakhstan are also an obstacle to the Chinese rail freight industry.

15:20 ~ Welcome back everyone, it is time for the testimonies from Chinese rail freight experts. In this video, the issues revolving around current market situation are analysed by various leading players. The video touches upon the challenges that the COVID-19 pandemic, for example the reinstatement of workers.

15:07 ~ Session II will soon commence. We will start at 15:15 with one video with testimonies from various Chinese speakers debating the current challenges, namely COVID-19 measures, energy shortages in China, and decreasing orders from Europe. At 15:30 there will be a panel session on the market outlook. Finally, at 16:00 there will be another video compiling insights from the Chinese industry on the Middle Corridor, cargo decentralisation, and transporting electric vehicles on rail.

14:38 ~ The first case study presented by Verweij is the production of car battery, which are largely built in Eastern Europe. However, raw materials often come from China and other countries in Asia. Many countries are looking into restoring, such as Hungary opening a terminal at the port of Trieste. For such a network, a solid rail infrastructure and embracing multimodality are necessary steps that need to be taken.

14:31 ~ Supply chain companies, according to Verweij, should focus on decentralising production and distribution, and decarbonise transport. However, this process comes with some challenges, such as the availability of suppliers.

14:25 ~ Kees Verweij, Partner at Buck Consultants took the stage to discuss the use of rail and the New Silk Road for machinery and automotive supply chains.

14:12 ~ More specifically, weaknesses of the New Silk Road, currently, are the war in Ukraine and the consequent sanctions imposed on Russia. Moreover, the zero-covid policy in China and the lack of effective subsidies from local governments are considered by Walczak as other issues that need to be solved. Lower volumes could be seen as an opportunity to carry out works to expand capacity as well.

14:08 ~ Inflation, interest rates, and the exchange rate between US dollars and euros are the main issues identified by Walczak when it comes to rail freight in Europe and the Union. Paying in US dollars has become much more expensive for rail freight companies in Europe.

14:04: ~ Walczak is discussing the future of the NSR. Data from UTLC shows that volumes to the EU are decreasing, while trains between China and Russia have been rising. According to him, the slight drop in numbers is part of the natural economic developments: the New Silk Road can not just keep growing.

14:00 ~ Walczak is expanding on the importance of alternative routes, especially at this time of geopolitical issues.

13:54 ~ It is time to discuss about the past, present, and future of the New Silk Road with Jakub Walczak, Rail Product Manager Europe at CH Robinson.

13:50 ~ Zhang is talking about the Chinese efforts in promoting and boosting economic development of the countries along the New Silk Route. For example, China-Railway Express has been growing since its birth, and 2022 was no different. TEUs transported this year, in fact, have increased by 3 per cent compared to 2021.

13:46 ~ Wen Zhang, Managing Director at CRCT Europe Logistics, is taking the stage to debate how challenges can be solved with “win-win collaboration”.

13:38 ~ Chunguo Du, Chinese Consul General in Dusseldorf pointed out how China the international relevance of the Belt and Road Initiative. He underlined all the milestones that were reached in 2022 concerning China-Europe rail freight, especially when it comes to Duisport, namely the new opportunity of transporting EVs from China on rail.

13:30 ~ As Hinne claimed, Diusport is ready to provide the existing infrastructure and build extensions to become the main hub for China-Europe trains

13:20 ~ Carsten Hinne, Member of the Executive Board at the port of Duisburg welcomed all the guests and is discussing how Duisport will continue strengthening the Eurasian connection. 20,000 ships and 25,000 trains pass through the biggest inland port in Europe, with over 400 connections every week. An area that was dedicated to coal processing is currently being transformed into the 10th container terminal in Duisport.

13:00 ~ The European Silk Road Summit has started, with people from more than 28 countries.

12:43 ~ The event is about to start, for Session I – Opening, at 13:00: after a brief welcome from on behalf of the RailFreight team, the speakers will be:

12:00 ~ Just one hour until the kick-off of the European Silk Road Summit. For today, two sessions are scheduled:

6:30 ~ Good morning from Duisburg! This is the live blog for the European Silk Road Summit. Here you can follow in real-time the discussions taking place at the event. The ESRS kicks off at 9:30 with a site visit around the Duisport area. After a networking lunch, the opening session will start at 13:00.