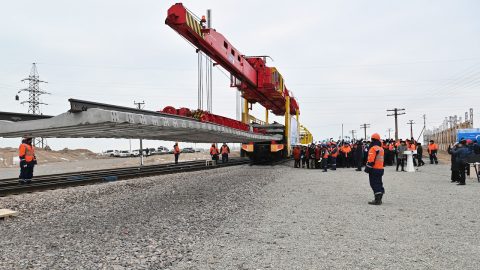 Kazakhstan has started with the construction of a second track on the railway line leading to the city of Dostyk, close to the border with China. This should increased the capacity of the crucial line by five times; from 12 pairs of trains to 60 pairs per day.

The project involves the railway line from Dostyk to Moyinty in Karaganda region, a line that is heavily used for cargo to and from China. Construction of the new railway line started on 17 November. “It will completely solve the transportation problems of Kazakh exporters in this direction”, said Prime Minister of Kazakhstan Alikhan Smailov.

Moreover, Dostyk is adjacent to Alashankou, one of the main border crossings for Eurasian traffic. The increase of capacity will therefore also benefit New Silk Road traffic.

According to the Prime Minister of Kazakhstan, the new railway line will have a total length of 836 km and facilitate the uninterrupted export of domestic products as well as increase the country’s transit potential. 419 engineering structures will be built, (5 large bridges, 87 small and medium bridges, 288 culverts and 14 highway overpasses) as well as new energy and communication facilities. The project will be completed in the fourth quarter of 2025.

For Kazakhstan, the potential to increase transit traffic is of strategic significance. The country’s President Tokayev pointed out that “in the past five years, the country’s container transit traffic has increased by 4.4 times; this year, the turnover of export goods exceeded 74 billion ton-kilometers, an increase of 11 per cent compared to last year.”

Demand continues to rise, but the infrastructure cannot cope with this, so the construction of the new infrastructure will solve Kazakhstan’s urgent needs.

The country’s ambitions for transit traffic are not limited to the Dostyk to Moyinty section. Recently, Kazakhstan revealed the location of a third border crossing with China, situated between the Baktu port in Tacheng, Xinjiang and Abai Oblast in Kazakhstan, north of the two existing rail ports between the countries.

Will the Chinese gauge finally be extended to Hanoi?