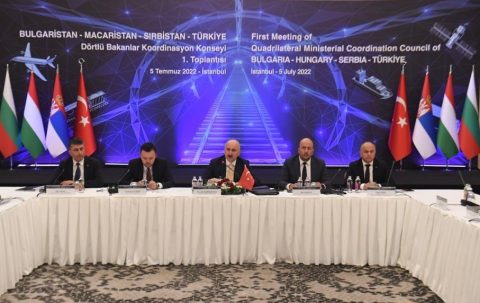 The transport ministers of Turkey, Bulgaria, Serbia, and Hungary established a quadrilateral coordination council and a rail transport working group. They aim to jointly invest in and develop rail infrastructure, focusing on freight transport. As the Turkish transport minister Adil Karaismailoğlu underlined, the partners aspire to become “regional and global logistics leaders”, and the Silk Road’s Middle Corridor will play a role in that.

“The working group will address railway infrastructure and green transport in line with the EU’s targets and try to make fast decisions and even faster implantation of them,” added Karaismailoğlu. On his behalf, the Serbian transport minister Tomislav Momirović said that “for the first time, we held a quadrilateral meeting with colleagues from Hungary, Bulgaria and Turkey to create a council and working group that will monitor all investments in infrastructure, primarily in the railway sector.”

“Benefiting our countries and the world”

“We aim to implement our plans for green transportation, which will affect the future not only of our countries but also of our world. We want to remove transport bottlenecks and establish a more effective and efficient transportation network,” commented Karaismailoğlu, who sees Turkey and the Balkan region becoming the backbone of Eurasian transport.

He did not miss the chance to mention the growing volumes through the Middle Corridor, which lately has become the main rail route for Asia-Europe traffic. Even if rail traffic through Russia returns to the pre-war volumes, he is convinced that the Middle Corridor is here to stay since it provides the best transit times, also compared to sea routes.

“We have serious responsibilities to develop trade and increase the efficiency in line with the Middle Corridor,” said the four ministers comprising the quadrilateral council to which the joint working group will report. This is the context in which Turkey, Serbia, Bulgaria and Hungary will cooperate. Just like Middle Corridor members work closely to develop the route, the four partners’ target will be to extend this cooperation on European soil.

As for infrastructure projects and investments that will bring the four countries closer to establishing an efficient rail transport corridor, the Kapikule-Halkali high-speed line can be considered the first step in this direction. “It’s an investment focused on international integration,” said Karaismailoğlu, who expects the line to coordinate with developments in the rest of the countries after completion.

The Halkalı – Kapikule project, scheduled to be completed this year, saw the first welding procedure in mid-June. There are various reasons why this railway line is considered to be a special project. First, it is part of the New Silk Road, where Turkey sees its growing role as a transit country.

It is, however, not a mere Turkish project. Europe is equally interested in the railway line. As such, the EU and Turkey have agreed on an investment plan. The EU funds the section from Kapikule near the Bulgarian border to Cerkezkoy with a 25 million grant. The section Cerkezkoy-Halkalı that connects to the city of Istanbul is financed by the Turkish government and costs 278 million.

The railway line will enable the movement of trains at a speed of 200 kilometres per hour. Unlike most high-speed projects, which are limited to passenger movement, this railway line is there to boost rail freight traffic just as much. The government has indicated the ambition to increase the modal split of rail from the current five to 22 per cent in 2053. According to various sources, freight transport on the line will increase from 1,53 million tonnes to 9,6 million tonnes per year. Passenger traffic should increase from the current 600,000 to 3,4 million per year.