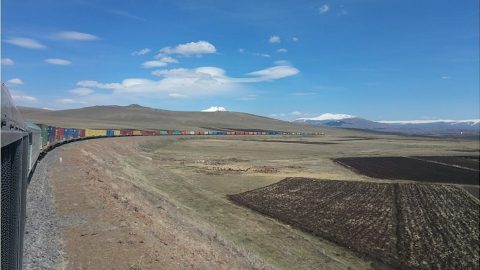 In response to the growing demand for Eurasian traffic via the Middle Corridor, RailBridge Cargo has added a third and fourth option to its portfolio in three months. It is offering space on the blocktrain that enters Europe via Romania, and offers a new rail-truck service, both with the end destination being Duisburg.

The first is a multimodal journey departing from Chengdu and connecting by rail to the Kazakh port of Aktau. Here, it crosses the Caspian Sea to Baku, for another train ride to the port of Poti. From this Georgian port, vessels take the cargo to the port of Constanta in Romania.

In three weeks time, RailBridge Cargo will also start offering space on the train from Xi’an to Baku via the Caspian Sea, with a truck journey providing the last-mile to Duisburg. The Xian to Duisburg service has a transit time of 25 days.This is the fourth route the Dutch logistics company offers since the outbreak of the war in Ukraine. 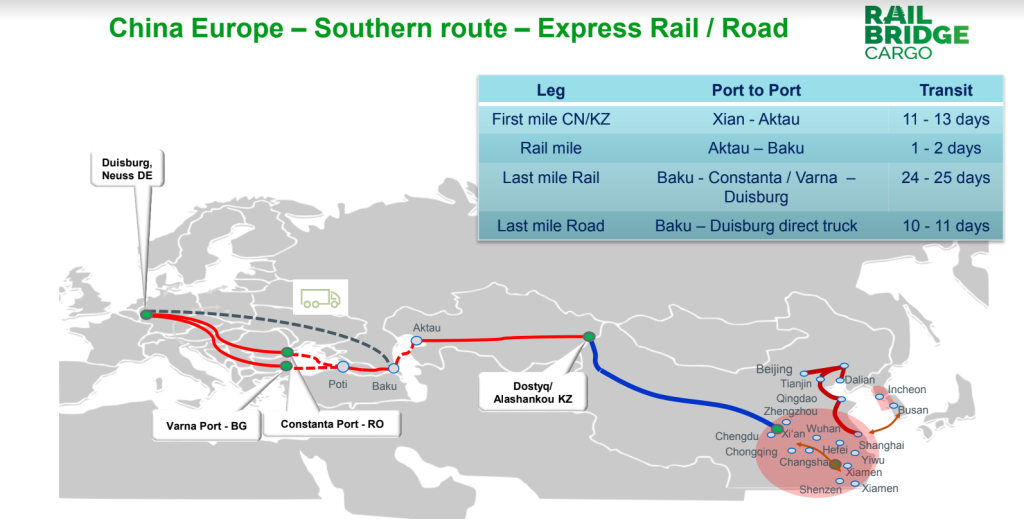 When the war in Ukraine started, the company reported that it would avoid Russia and Belarus in its transport between Asia and Europe. The most important reason was that it did not want to do business with Russian Railways.

RailBridge Cargo recently slightly adjusted this policy by re-opening the northern route for customers that have ‘no other option’. “Companies in Europe (and all over the world) are facing diverse supply chain issues because of the current situation. These issues have a negative impact on production, tradelines, companies, jobs and humans. Some customers have no other option than taking the northern route. We see that customers who used rail freight solutions in the past are now sometimes forced to choose air freight instead to reduce transit times. This has a negative impact on global C02 reduction”, the company stated.

Nevertheless, the focus of the company remains on the Middle Corridor. “It is our goal to support and convince customers to choose this route, due to the Ukraine invasion of Russia and our ethical motivation as a company. Our company is therefore investing in the extension and expanding of these new routes”, it says.

According to the logistics firm, the route is becoming increasingly attractive, with improved transit times and quality. “For example, in September a new terminal will be launched and because of that transit times will decrease, and more ferries will be operational”, it commented.

The first route it launched was via Istanbul, crossing only the Caspian Sea and from Baku overland to Turkey. This service, which is still up and running, has as a departure point Xi’an and Zhengzhou, and Duisburg as a destination.

The third route offers two departures per week from Chengdu to Duisburg and Hamburg. “We have found a solution to overcome the congestion in Baku, which decreased transit time from 39 – 41 days to 31 – 33 days. This September, we expect that transit times will decrease even more, with four days due to the extra ferry capacity.