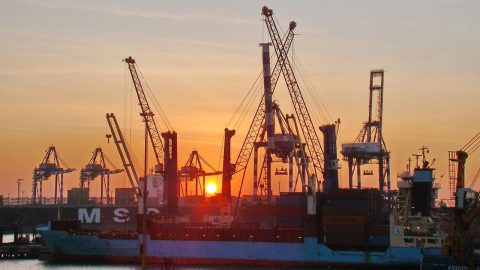 The Middle Corridor may be seen as a lengthy route with many hurdles, but this company has established a record transit time already. As one of the first companies to be using the Middle Corridor, TopRail can report a 22-day journey from Suzhou to Poti. “There are still many challenges along the route, but we are very proud of our first train with a record transit time. This can be much more than just an alternative to the Russian route”, commented Leonardo Vender, executive director at TopRail Europe.

TopRail keeps offering its services through the Russian route. Nevertheless, the company offers a new service on the Middle Corridor for the customers unable or unwilling to transit through Russia. The company’s first train departed on 1 April from Suzhou, China and arrived in Aktau on 12 April. Here, it left within 4 days, avoiding the usual delay in Aktau by chartering an extra vessel. The transit time in Baku was the 17th, and the cargo reached the Georgian port of Poti on 22 April.”

“The China-Poti transit time was 22 days in total. We did better than expected despite some minor delays in Aktau. Yet I am confident we could make it under 20 days, if the expected investments and improvements of this routing will keep going”, mentioned Vender.

The forwarding company plans more trains from the Suzhou, Ganzhou and Zengcheng areas in May. “It’s hard to estimate the fixed number of dispatched trains per month since the situation changes constantly and the market still has to recognise and test this new routing to Europe. For now, we aim for two”, said Vender.

For the first Middle Corridor trains, the port of Constanta in Romania will be TopRail’s gateway to Europe, with a mixed train dispatched from there to France, making additional stops in Germany.

However, the Silk Road company considers using other ports too. “Another option would be a short-sea connection from Poti to the port of Trieste”, explained Vender. Trieste is an excellent option, he said, since you can reach almost everywhere in the European hinterland from there using block trains or the existing intermodal network.

On top of that, from Poti, the company can establish short-sea connections to Turkey, reaching Istanbul in just two days. This would be the end destination of that connection, as they aim just to serve the domestic market. In any case, the port of Poti is what TopRail considers its central hub in this route, without excluding the port of Batumi for operations. From there, it can reach many more destinations than the ones mentioned.

“Our idea is to use the ports of Poti or Batumi as the main hubs to serve Mediterranean ports in France, Italy, Spain, but also in Tunisia or Morocco or other Mediterranean ports”, highlights Vender. We are not used to thinking about short-sea distribution in Europe, as we are a core railway company, but it is time to try. We had this idea before, but the market was not ready. Now it is more responsive, and this corridor is getting more space to develop, also from the side of the Chinese local platforms”, he adds.

“Maybe the whole situation is a clear opportunity to invest in new markets and routes that were not there before. For instance, why look only to Germany and not Northern Africa?” wonders Vender. For the record, China is also investing heavily in these regions as part of an extended Belt and Road initiative.

“In any case,“our number one priority is to have a fast connection from China to Poti. Then, the short-sea connections will be decided based on the transit times that we can reach”, explained Vender. This product will also depend on the performance of deep-sea shipping in the coming months. “With such an approach,“TopRail proves that flexibility is key and that it can adjust its offers in any kind of situation”, concluded Vender.