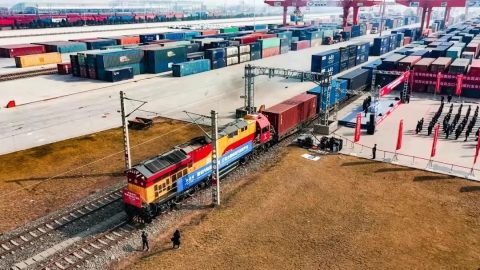 The New Silk Road connection between Xi’an in China and the Valenton terminal in Paris, France, will become frequent and stable. From February 2022, the service will run with one train per week “to alleviate the difficulties faced in maritime transport due to the health crisis”.

FORWARDIS, the subsidiary of SNCF that also operates the train, mentioned that the stabilisation of this service could also prove beneficial in terms of exporting products to China. After all, the freight forwarder estimates to double its rail freight traffic between France and China in 2022.

During November, a spokesperson from SNCF had explained to Le Figaro that France plans to make full use of the Eurasian transport opportunity by rail, as does neighbour Germany, with the national railways expressing its confidence in this emerging freight product. He also mentioned explicitly for the Xi’an-Valanton service that SNCF estimated it to become regular: “Considering the current soaring prices of sea freight and the fact that the transit time of sea shipping is twice as long as rail transport, the slightly higher price of the latter becomes acceptable. We hope that the frequency of Xi’an-Valenton service will increase in the future.”

Gaining from the momentum

The service between Xi’an and Valenton was established in June 2021 as a direct connection. Later on, it acquired two more drop off points in France, Lyon and Bordeaux. November 2021 was a historic moment since on the 25 of the month commenced the first eastbound train of the service carrying high-end French furniture, linen products, cosmetics and wine. The train leaves Valenton half-full carrying 20 40-foot containers and adds 20 more on its stop in Poland.

This is where the “export development” plans of FORWARDIS and SNCF come to the spotlight. With the possibility of regularly sending eastbound trains from Valenton to China, the two companies see a golden opportunity to expand and exploit a route that opened to substitute a not so successful one.