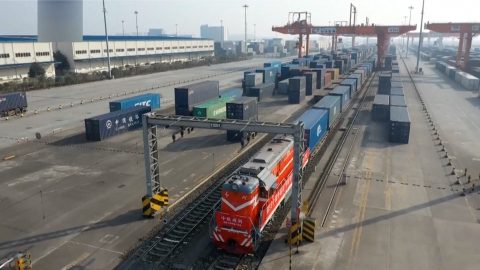 No trains from China stop in Lithuania anymore

As many might remember, diplomatic relations between China and Lithuania entered turmoil in late August due to Lithuania’s and Taiwan’s intention to strengthen their bonds by opening representing offices in each country. China Railways contradicted the news back then. However, recent information from Chinese media mentions the downgrading of the diplomatic relations between the two countries and the stoppage of direct trains to Lithuania.

Containers going back and forth

For China-Europe trains going to Kaliningrad, Lithuania is only a transit option currently. In the past, trains used to stop in Vilnius to load and unload containers. This is not an option anymore since trains make no stops in Vilnius and continue directly to Kaliningrad.

“The container drop-off has become very complicated,” comments Tomas Jankauskas from ACE Logistics, a company active in the Baltic and eastern European countries. “Container unloading takes place at the border crossing between Lithuania and Kaliningrad. From there, containers are transported back to Vilnius,” he adds. The situation does not seem to change anytime soon since the tension between the two countries does not deescalate.

I an analytical article that we wrote back in August, we discussed the possibility of China using the New Silk Road and the China-Europe express as political weapons to enforce its agenda. A couple of weeks ago, Frans-Paul van der Putten from the Glingendael Institute confirmed in an exclusive interview that one of the reasons that China initially launched the Belt and Road Initiative was the geopolitical rivalry with the US.

The same seems to apply to China’s relations with EU countries, and Lithuania is the best example to prove this. In the past, European policymakers like Maja Bakran Marcich had warned that good synergies between Europe and China should be characterised by mutual respect and control over the power relations. In practice, China seems to be implementing an opposite approach.

Frans-Paul van der Putten will talk about the complex dynamic of the BRI together with his colleague at the European Silk Road Summit. It is the second time that he speaks at the event that he follows with great interest.

The European Silk Road Summit takes place in Amsterdam, the Netherlands, on 7 & 8 December. Van der Putten and Xiaoxue Martin will speak in the last session of the second day, followed by an audience-wide debate. Are you interested? You can have a look at the programme here. Or, you can register here.