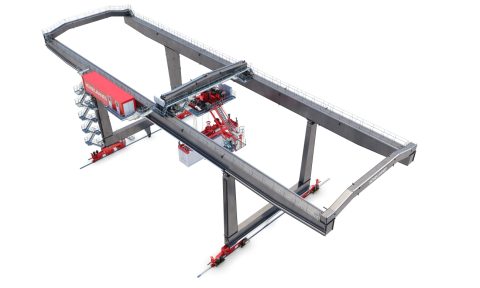 EuroTransit Group of Companies is currently building a new intermodal terminal in Dostyk, Kazakhstan, to facilitate rail traffic at the border with China. Construction works are in full steam, and the company just ordered two Rail-Mounted Gantry (RMG) cranes to equip its facilities. The new cranes will be provided by Konecranes, a lifting equipment company, and will be delivered to the terminal in Q4 2022.

EuroTransit’s new Dostyk intermodal terminal is constructed very close to the existing Dostyk station. It’s part of an expansion project which aims to facilitate rail freight traffic on the Kazakhstan-China border and the New Silk Road. The managing company has not disclosed further details on the terminal’s construction and characteristics, but it has an interesting partnership in the pipeline.

As for the newly acquired terminal equipment, Erlan Dikhanbayev, CEO of EuroTransit, mentioned that the RMGs are central to Eurotransit’s ambitious growth plans. “We have very demanding environmental requirements – we often have to deal with strong winds and very low temperatures. We also had very demanding requirements for container handling productivity and reliability. Konecranes convinced us with their reliable technology and service support,” he explained.

“The two RMGs on order will have a rail span of 32 metres and will serve six train tracks, lifting containers 1-over-2,” highlights Konecranes, the equipment providing company. They will be equipped with an intuitive GUI, in simple words, a user-friendly interface, accompanied by extra visibility that video cameras will provide. Finally, they will also be equipped with the Konecranes DGPS Skew Control System and the Auto-positioning and Auto-TOS Reporting smart features.

The developer of the East-West Gate (EWG) intermodal terminal, being built in Hungary and EuroTransit, will cooperate in providing a fast and reliable transport route. The parties signed an agreement for cooperation last April. The two parties are looking for partners to whom they want to offer complex logistics services between Asia, mainly in Western and Inner China, and the European Union, under a long-term cooperation agreement.

Dikhanbayev said that the new intermodal terminal in Dostyk, the most important transhipment area on the Kazakh-Chinese border, would be coordinated with the East-West Gate in Fényeslitke. Until the two terminals are realised, the shipping base will be built, and workflows will be synchronised, which will allow the terminal to operate at full capacity immediately after being handed over.