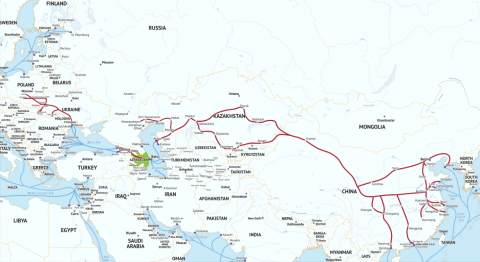 The rail freight service from Istanbul to Xi’an is now a regular on the timetables. The first China-bound train from Turkey departed on 4 December last year, and the second has just arrived in the centrally located Chinese hub. The service will run twice a month.

It is a positive start of the year 2021. The new service means a great deal to Turkey, which intends to take an active role on the New Silk Road. The service also adds value to the Middle Corridor, an alternative route connecting Europe and China. So far, the focus was on westbound traffic.

The new service, carrying home appliances from Turkey, is estimated to kick off Turkey’s export trade towards China and provide a faster route from Europe to the Far East. Turkish Exporters Assembly (TIM) Chairperson, Ismail Gülle, earlier stated that “the development is significant for the future of Turkey’s exports” since the country intends to expand more in the Chinese market.

The train covers 8,693 kilometres, traveling through Georgia and Azerbaijan, where it stops at the port of Baku to load cargo on a vessel across the Caspian Sea. On Kazakh side of this sea, the cargo is reloaded on the train to continue its journey through the vast country and finally reach China.

The Baku-Tbilisi-Kars railway line is an important element of this route, which has proven to facilitate smooth and fast traffic between Turkey and China since its launch in 2017. More recently, Turkey opened up its Marmaray Tunnel for freight traffic. Since November 2019, trains can cross the Bosporus Strait via the tunnel, which means the train journey from Baku to Europe can be carried out without a single stop. Both of these infrastructures increase the potential of Turkey as a transit route between Europe and China.