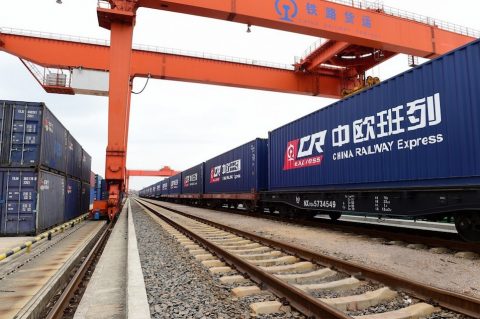 The fastest railway link between China and Germany is about to have an additional departure. From July onwards, the Xi’an-Neuss Express will see two trains per week in both directions. The approximate 9,400-km distance is covered in 10 to 12 days. Previously, the journey took 17 days.

DHL Global Forwarding and Xi’an International Inland Port Investment & Development Group Co. Ltd launched the Germany Express in October last year. Since the first train departed on 5 October last year, we kept the frequency as one train per week. From July on, we will increase this to two trains per week. Nowadays, express services receive more and more attention from the market”, says General Manager of the company Shao Boer in an interview with RailFreight Live. The full interview can be seen during the broadcast at 1pm, but here is an excerpt.

The significant lead time reduction was made possible by travelling through the Mamonovo-Braniewo railway border between Russia and Poland. This border crossing is situated in the Russian enclave of Kaliningrad. “Usually, after arriving in Kaliningrad everyone thinks of using the shortsea connections to the northern ports of Germany, such as Mukran and Rostock. But our line is from Braniewo as an entry point to Europe, without transit and only using rail.”

The same lead time would be achieved if the end destination was Duisburg, he says, answering to the question if the choice for Neuss had contributed to the time. “The reason for choosing Neuss is that the terminal is new, with less trains and less congestion.” From Neuss, there is another connection to Hamburg.

Boer explained that the rate of the Germany Express is slightly higher than on regular routes. “This is because this is a promotional phase.” According to several market players, this increase in price is around 300 additional US Dollars.

At the same time, the company is lowering the price of 45ft reefer containers to encourage the so-called called chain. With the lifting of the embargo by Russia on the transit of sanctioned goods overland, the Chinese import of fresh products from Europe is expected to boom. Many fresh products require cooled transportation, carried out in reefer containers.

Xi’an is actively preparing to receive the shipment of fresh goods in the city. The import requires specific certificates, which have been obtained for meat coming by rail, but not yet for fish, another product high in demand.

The company has found a solution for this. For frozen seafood import certificates can be acquired at the airport, where the bulk of frozen seafood comes in. When carried by train, the seafood is shuttled to the airport by truck, in order to get the certificate, Boer explains. “We are currently reaching out to clients and hopefully within the first half of the year we can make a breakthrough. Especially beef and pork are high in demand in Xi’an.”

Xi’an is one of the main Chinese hubs on the New Silk Road. It hosts major industries like mechanicals, electronics, bio-pharmaceuticals and automobile manufacturing. “For example,  AOC Electron has a factory in Xi’an, mainly producing screens and TV sets. Xi’an also has a great number of  PV companies, Such as LONGI Green energy, exporting cargo with blocks trains to Europe” says Boer.

At the same time, it is a must-pass point in China due to its central location. According to the Xian-based expert, trucking takes no more than two days from Xi’an to any major city in China. Coupled with the infrastructure offered by the inland port since 2010, the city has the right mix of facilities for the explosive growth of international rail freight traffic.

Due to such factors, the year 2020 has been a year of many heights already. The 1000th train towards Europe, a usual milestone for Xi’an, left the city on 6 May 2020, 78 days earlier than the same period last year. From January to May 2020, the China-Europe train from Xi ‘an ran a total of 1331 trains, 2.2 times more as the same period last year, including 409 trains heading for Central Asia and 922 trains head for Europe.

Several highlights were the new route from Xi’an to Barcelona, or to Tilburg, both launched in April. The train to Barcelona set off on 8 April and took 18 days to arrive. On 26 April, a freight train loaded with LONGI Green Energy’s photovoltaic products set out from Xi’an Xinzhu Station on its way to Tilburg in the Netherlands for GVT Intermodal. The products had previously been shipped by sea from Tianjin Port in China but in light of the pandemic, GVT Intermodal transported the products directly on the China-Europe freight trains, saving time
and warehouse costs. This July, a new service is planned to the Central and Eastern European region.

Do you want to see the full interview with Shao Boer? It will be broadcasted at RailFreight Live on Friday 19 June, at 1pm. Do you want to be up to date about the latest broadcasts? Subscribe to our YouTube Channel.