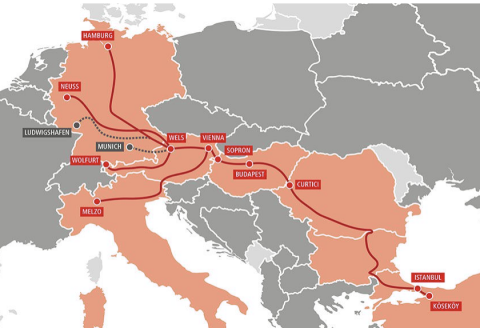 Rail Cargo Group has launched two new connections from Turkey to Europe. The Romanian hub of Curtici and the Hungarian capital of Budapest are now connected to respectively Istanbul and Köseköy. With the new rail freight lines, the OBB-subsidiary wants to tap into the wider network to China.

Rail Cargo Group (RCG) already operates several regular intermodal train connections between Europe and Asia via the regular route of the New Silk Road. By connecting two European destinations to Turkey, it expand the possibilities of the Middle Corridor, which runs via Georgia and Azerbaijan, crossing the Caspian Sea to Kazakhstan.

The TransFER Curtici–Istanbul provides a direct connection of one round trip per week from the Romanian terminal to Halkali, the most important international freight terminal in Turkey. This new TransFER connects the economic regions of Turkey and Romania with a transit time of 66 hours.

The TransFER Budapest–Köseköy connects the Asian part of Turkey with Europe – with a transit time of just under five days. With this weekly round trip, RCG is expanding its network and logistics services between Asia and Hungary together with its partners TCDD and Pasifik Eurasia.

“This extension to the RCG network provides improved connections to economic hubs across the entire Eurasian region”, the rail freight operator said. “The chance to link Anatolia and Central Asia / China means that all of Western Europe’s economic centres are also connected via the logistics hub of Budapest. This in turn means the entire Eurasian region can tap into the RCG network.”

In Turkey, the trains run through the Mamaray Tunnel underneath the Bosporus – the strait between Europe and Asia. This tunnel was previously only open to passenger trains, but was opened for freight traffic in October last year. This decreased transit times on the Middle Corridor significantly, as the train journey from Baku to Europe can now be carried out without a single stop.

The Mamaray Tunnel plays a key role in this non-stop connection”, says RCG. “Freight trains on this route use it to provide a seamless underground connection between the Asian and European parts of Turkey. The first intermodal block train for one of our customers loaded with 36×45-foot containers of white goods as well as car spare parts travelled non-stop through the tunnel on its way from Arifiye in Turkey to Sopron in Hungary. This proves that rail transport is not only efficient but above all competitive and is becoming an increasingly attractive mode of transport.”