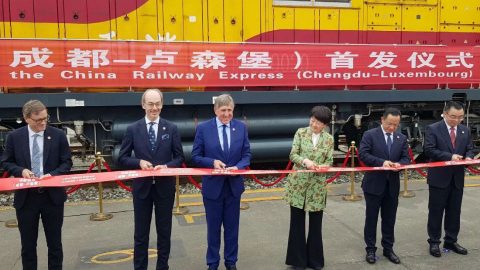 A first train between Chengdu in Central China and Bettembourg-Dudelange in Luxembourg has departed this Sunday 20 October from the Chengdu Qingbaijiang International Railway Port. It happened in the presence of vice-prime minister of Luxembourg François Bausch and the party secretary of Sichuan Province Peng Qinghua.

The service is jointly launched by CFL multimodal, Chinese operator Chengdu International Railway Service (CDIRS) and RTSB. The journey is a test ride in westward direction. However, the plan is to launch a regular service in both directions.

In Luxembourg, the containers connect to a wide network of last-mile solutions by rail and road. Daily combined train shuttles are available to Lyon, Le Boulou and Barcelona, Trieste (with ferry connexions to Turkey), Antwerp, Zeebrugge and Gent (with ferry connexions to UK and Scandinavia). Since March this year, the intermodal terminal Bettembourg-Dudelange is also connected to Paris.

The train carrying household appliances, automotive parts, electronics and fruits is expected to arrive in the terminal of Luxembourg at 3 November. This arrival time an be confirmed after it has passed the border with Poland in Malaszewicze.

The role of Luxembourg on the New Silk Road is also a topic on the programme of the European Silk Road Summit. Imad Jenayeh, senior business development manager at CFL Multimodal will talk about the Chengdu-Luxembourg China Railway Express as part of the session European hubs, on the second day of the summit.

The European Silk Road Summit takes place on 26 and 27 November in Venlo, the Netherlands. It is a two-day, international event dedicated to the New Silk Road. The programme is complete and can be viewed here. Registration is still open.