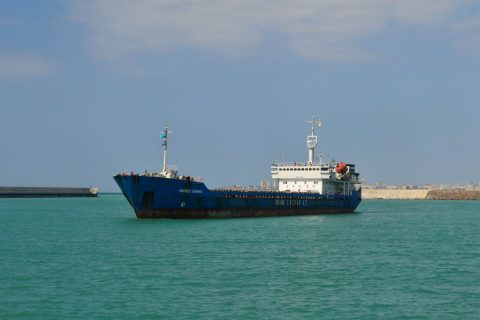 A regular feeder line across the Black Sea will be launched next month. The line serves transit traffic on the Middle Corridor, which connects Europe and China. The service is to become operative on 20 September and runs between the ports of Batumi/ Poti in Georgia, and the port of Constanta in Romania.

The first ship to be used on the new regular feeder service is a vessel owned by Azerbaijan Caspian Shipping Company CJSC. The voyage between the Black Sea ports will take five days in one direction. The new details were concluded on 20 August, during a meeting of the Middle Corridor working group dedicated to the service.

The participants of the meeting also agreed about technical and commercial aspects of the project in the ports of Georgia and at the container terminals of the port of Constanta. Based on these aspects, they were able to set the tariffs for the Batumi – Constanta – Batumi feeder line. Moreover, they approved an action plan for the launch of the regular line, as well as future development plans.

According to the Middle Corridor, a joint venture dedicated to the development the route of the same name, the the launch of this regular feeder service will significantly reduce the transit time for transporting cargo on the Black Sea stretch. It should also make the tariff conditions more attractive and in general lead to an increase of container traffic on the route.

Although the feeder line can be used for transportation across the Black Sea in general, the main purpose is to serve the Middle Corridor. This alternative Eurasian corridor is also referred to as the southern route, because it deviates from the New Silk Road in Kazakhstan.

From the Kazakh port of Aktau, a feeder line crosses the Caspian Sea to the port of Baku in Azerbaijan. From here, there are different options. The Baku-Tbilisi-Kars train takes cargo into Turkey, from where various European destinations can be reached by rail.

Or, a second sea leg can be included in the journey, crossing the Black Sea and continuing by train on the European side. Although this route is geographically shorter, the multimodal route still has not proven its added value as the transshipment causes an increases in transit time and makes the service vulnerable to delays.

The new feeder line is an initiave of the company Middle Corridor, which was previously named the International Association of the Trans-Caspian International Transport Route (TITR). It is a joint venture of many parties involved with the development of the Middle Corridor. Earlier this year, meetings of the working group regarding this project were held in Nur-Sultan (Kazakhstan) and in Constanta (Romania).