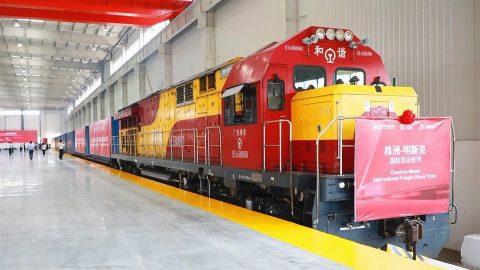 China has launched a new container service to Europe. The first train departed from the CRRC Logistics Base in Zhuzhou on 1 July. After a journey of 13 days it is expected to arrive in Minsk, the capital of Belarus.

The first Zhuzhou – Minsk train consists of 42 containers loaded with skid-steer loaders, laptops, LED panels, green tea and other products that are produced in this Chinese city and the adjacent Hunan province. The service is the first service from Zhuzhou to Europe. Three other connections from this Chinese city will be opened this year – to Tilburg (the Netherlands), Moscow (Russia) and Budapest (Hungary).

Currently, Belarus is an important railway hub on the New Silk Road. The vast majority of Chinese trains to Europe are passing via this country. In general, 48 Chinese cities have launched 65 freight train routes that link them with fourteen countries and more than forty European cities.

At the same time, Belarus has two direct trains to China. The first one, known as the Kazakhstan Vector, runs from Brest station near the Polish border via Russia and Kazakhstan to Alashankou, the Chinese station located close to the Kazakh border. The other container service is named the Mongolian Vector. It connects Brest with Erlian, the Chinese station in Inner Mongolia. This train runs via Russia and Mongolia.