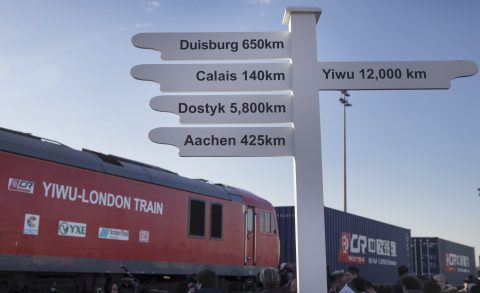 After conducting a study about the New Silk Road in 2017, research firm Roland Berger has assessed Eurasian rail cargo transport in several ways, mostly looking at the alternative corridors and terminals, planning to obtain a piece of the cake. At the RailFreight Summit in Gdansk, Andreas Schwilling will present some of these findings. “The route Brest – Małaszewicze still dominates with a share of above 90 per cent. But depending on the destination in Europe, alternative entry points do make a lot of sense”, the researcher said.

Andreas Schwilling is partner at Roland Berger’s Transportation Competence Center, focusing on railways, public transport and innovative mobility. Below is an interview, providing a sneak preview into his presentation at the RailFreight Summit. This presentation will take place on 15 May, the first day of the event.

What can you say about the number of alternatives to the traditional route via the Malaszewicze-Brest border crossing?

Eurasian rail cargo has been a great growth story, and a lot of players want to have a ‘piece of the cake’. Due to the growing volumes, we observed bottlenecks at the Małaszewicze border. Therefore we see several new alternatives emerging. However, only a few of them fully operational.

Where do these alternatives come up? Which areas are successful? And why?

We see more than ten entry points for Eurasian rail cargo existing, respectively emerging. The route Brest – Małaszewicze still dominates with a share of above 90 per cent. Depending on the destination in Europe, alternative entry points do make a lot of sense. I will elaborate more in my presentation.

How is Poland coping with the development of additional border crossings?

Poland is doing the right thing in both trying to process rising volumes and in anticipating more competition and thus trying to improve its competitiveness. It is investing in upgrades of its rail infrastructure, removing bottlenecks, enhancing process efficiency at the border and improving transparency on the status of the freight.

Slovakia is becoming an important transit country. For which markets is this true and why?

The Slovak Republic and the European Rail Freight Corridor 9 is well suited for Eurasian rail cargo to Austria, southern parts of Germany and countries in Southern Europe. Terminals with both standard and broad-gauge links do already exist, e.g., in Dobra and Kosice.

Does Slovakia depend on transit through Ukraine? And if so, does this cause any obstacles?

For direct Eurasian rail cargo, yes, trains enter the Slovak Republic from Ukraine (entering via Małaszewicze and RFC 11 would be a detour). Due to the conflict between Russia and Ukraine, traffic via Ukraine to the Slovak Republic has virtually come to a standstill, volumes are extremely low. A lot of shippers and operators fear delays and other problems on the route from Russia via Ukraine to Slovakia.

What needs to happen to fully utilise the potential of Ukraine as a transit country?

The political situation between Russia and Ukraine must improve. In addition, Ukraine will have to expand its border crossing lines, invest in new equipment, modernise the infrastructure and hire more qualified personnel, e.g. engineers. Efficiency of all relevant processes at the border between Ukraine and the Slovak Republic must improve, e.g., customs handling.

Hungary also wants a slice of the pie. Is it successful in doing so? What could be the future role of Hungary?

Hungary has already broad and standard gauge facilities at Zahony, but they are linked to Ukraine, too. Hungary has a good link to the southwest via RFC 6. In addition, the topography is better suited for railway traffic than that in Slovakia, thus Hungary can become quite a strong competitor to traffic via the Slovak Republic.

Which intermodal connections (rail-sea) have become important on the New Silk Road? Why do you think these are gaining importance?

We have seen services via Kaliningrad coming up enabling short sea extensions to the Nordics. And these connections via the Baltic Sea definitely make sense, also Riga and Klaipeda can be interesting ports for this. Connections via the Black Sea have not been established yet for Eurasian rail cargo. One Southern route of the silk road involves a ferry across the Caspian Sea. But volumes of the Southern routes are still low due to significant infrastructure constraints.

This year’s RailFreight Summit is the second edition of the event. Top-level speakers will gather in the intermodal hub to discuss New Silk Road connections and other routes through Poland and Central Europe. Registration is still open. More information about the event can be found on the website.