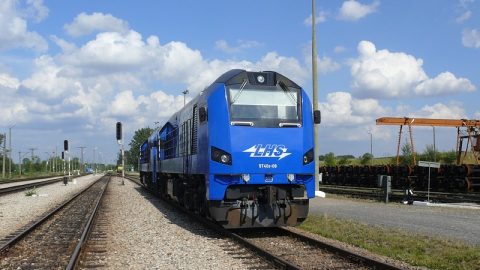 PKP has launched a new route to China

Polish railway company PKP Linia Hutnicza Szerokotorowa (PKP LHS) has launched a new route to China. Running a trial, a container train has departed from Euroterminal in Slawkow, and it will continue its journey on the Middle Corridor (previously Trans-Caspian International Transport Route) via Ukraine, Georgia, Azerbaijan and Kazakhstan.

“This route is shorter than the sea link and much cheaper than air transport. It responds to the needs of freight forwarders and cargo handlers who want to avoid long-distance sea transport, skip queues in Asian ports and efficiently cross the borders of the European Union. This service ensures the delivery of just-in-time cargo”, Zbigniew Tracichleb, CEO of PKP LHS said.

The container train is operated by Far East Land Bridge (FELB), an Austrian logistics operator and subsidiary of RZD Logistics. “Together with PKP LHS, we have big plans for the westernmost 1520mm-wide railway line. We are proud to open a new route, especially as the Middle Corridor responds to the growing demand for food exports from Europe to China. Italian kiwis or Polish apples, as well as meat or sweets from all over Europe can be delivered to China in less than twenty days to China”, Wilhelm Patzner, CEO of FELB added.

The Middle Corridor was launched in 2013, when the leaders of national railway companies of Kazakhstan, Georgia and Azerbaijan signed an agreement on the establishment of a Coordination Committee for the development of the route. Today, the regular members of the Committee are five railway companies (Kazakhstan Temir Zholy, Azerbaijan Railways, Georgian Railway, Ukrzaliznytsia and TCDD Taşımacılı), three seaports (Aktau, Baku and Batumi) and one shipping company (Azerbaijan Caspian Shipping Company). PKP LHS has been an associate member of the Committee since October, 2016.

PKP LHS is a state-owned railway company, part of PKP Group. It owns and operates 394 kilometre of broad gauge railway line from the Ukrainian border to Slawkow, near Katowice. In 2017 the company carried 10.6 million tonnes of cargo. FELB (Far East Land Bridge) is a railway operator that specialises in transporting 20 and 40 foot containers between the Far East and Europe. In 2017 the company generated revenues of 138.5 million Euros, owned over 7,000 containers and carried out six rail connections per week.