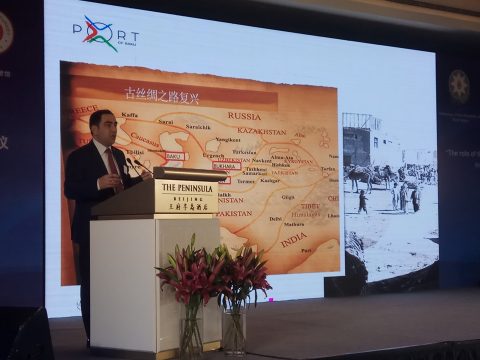 The growing potential of the Trans-Caspian Silk Road rail route – dubbed the ‘Middle Corridor’ – has taken another stride with the addition of Turkish State Railways to its membership.

Until now a relatively underused strand of the New Silk Road, the middle corridor runs from south east Asia and China through Kazakhstan, by the Caspian sea, and then into Azerbaijan, Georgia and onto Europe.

With most traffic still concentrated on the northern axis, the middle route likely to become increasingly important as rail operators and customers look to get into new markets. This was demonstrated last month with the launch of the inaugural Baku-Tiblisi-Kars service.

Ankara, Turkey’s capital, has just hosted the General Meeting of the Trans-Caspian Internationsal Transport Route (TITR), where Turkish State Railways – Transportation JSC (TCDD) was accepted as a new member of the TITR. A reshuffle of the management board saw the addition of Veysi Kurt, General Director of TCDD, and Beken Seidakhmetov, Permanent Representative of the Transport Corridor Europe Caucasus Asia (PS IGC TRACECA) in Kazakshstan).

The meeting heard plans by TITR management to improve organisational and technological elements that, it is hoped, will help increase rail freight volumes by up to four million tonnes in 2018. A round-table discussion involving Turkish freight movers and logistics companies also discussed the country’s prospects for growth through the Middle Corridor. Finally, Sanzhar Yelyubayev, Vice President for Logistics at JSC Kazakhstan Railways, presented a general status report on the TITR’s activities.

The general meeting came on the back of a conference in Beijing on the role of the Trans-Caspian East-West trade and transit corridor within the context of the Chinese-led ‘Belt & Road’ initiative. More than 200 representatives of government authorities, transporters and logistics firms, Chinese businesses and the scientific community attended the event.