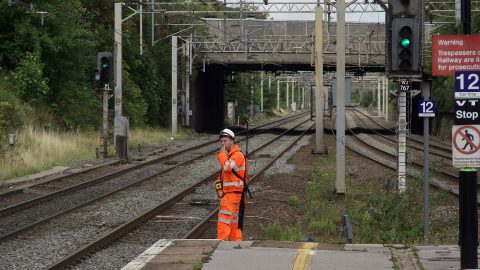 Trespassers cause half of European rail accidents

More than 50 percent of rail accidents in Europe are caused by people who enter the railway unauthorised. This was concluded in the annual safety report of the international rail organization UIC. The organisation therefore calls on governments to inform citizens about the dangers of entering the railway.

In total there were 1,785 accidents in 2017 on the European track (not taking into account minor accidents). That is 3 percent less than 2016 (1,846) and slightly more than the safest year, 2015. Then, there were 1,780 accidents. In 80 per cent of all cases third parties were registered as a cause of the accidents on the European rail network. This mainly concerns people who enter the railway unauthorised. 24 percent were accidents on railroad crossings.

The number of fatalities also decreased in 2017. In 2016 there were 1,098 deaths due to accidents, while this figure was 972 in 2017. But, 95 per cent of the 972 fatal accidents involved a person from outside the rail sector. UIC says that the rail sector has only limited influence on these people. The railway organisation therefore believes that authorities must take responsibility for informing residents about the potential dangers of entering the railway environment.

“It is of the utmost importance that governments play a role in promoting knowledge and awareness of the risks,” UIC advises. “Authorities must continue their efforts to protect the track against the behavior of unauthorised persons, just as they have done for road transport for years.”

Internal causes within the rail sector were the reason for the accident in 16 per cent of the cases. These are human errors, such as mistakes made by drivers or maintenance personnel, and technical defects, such as defects in the equipment.

A total of 77 victims fell among employees of railway companies. Of these employees, 38 per cent died due the an accident, and 62 per cent was seriously injured. In 2017, there were more casualties among rail employees than in 2016, when this occurred 63 times. Most accidents with victims happen because they are hit by moving equipment during shunting.

A total of 124 accidents occurred as a result of train collisions and derailments, leading to ten deaths. The victim was seriously injured in 72 cases. More than half of all victims were involved in two accidents. UIC emphasises the fact that there were no casualties in104 cases.

UIC says train travel is already the safest way to travel by land. Nevertheless, the European railway is still improving in this regard. Between 2012 and 2017, the number of accidents and casualties has dropped by nearly 20 per cent. UIC says this is because the rail sector is actively working to make the rail safer.

This is also apparent from the Global Safety Index (GSI) of UIC. It does not only contain hard figures about accidents. The cause, type, frequency and category of victim are also weighed. For example, accidents caused by mistakes made by railway companies and involving passengers and employees are more serious than accidents at level crossings.

According to UIC, this provides ‘deeper insight’ into the overall safety on the trail. The GSI shows that, despite the fact that the number of accidents has remained about the same since 2015, the railway in 2017 has become somewhat safer again.

This was the twelfth time UIC issued a safety report. UIC has figures from 23, mainly European countries, including the Netherlands, Belgium, Spain and the Czech Republic. This year UIC also included figures from Iran, Ireland and Turkey for the first time.