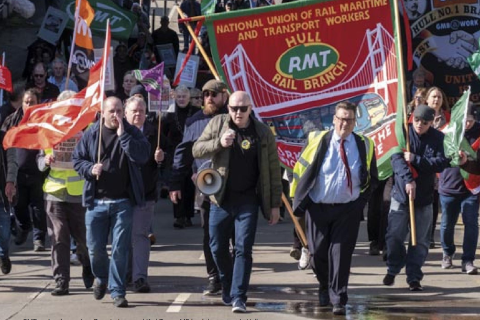 UK trades union members have voted overwhelmingly for strike action. The result of a nationwide ballot was announced late on Tuesday evening, giving unions a mandate to call their members out in what has been likened to the biggest national strike in almost a century. The ballot of members of the National Union of Rail, Maritime and Transport Workers, commonly known as the RMT, returned an 89 per cent vote in favour of strike action, on a turnout of 71 per cent of the membership. Action could begin as early as June and could well target the Queen’s Jubilee weekend.

Following their legal obligations, the RMT balloted over 40,000 members, who have returned an overwhelming vote for strike action on the railways of Britain. Over 25,000 voted to withdraw their labour in support of claims that the industry intends to cut safety personnel. Although the ballot did not involve any freight operators, it crucially balloted Network Rail employees and passenger train operating companies. The union will now be demanding urgent talks with Network Rail and the 15 train operating companies to find a negotiated settlement to the dispute over pay, jobs and safety.

The RMT ballot is the most significant endorsement for industrial action by railway workers since privatisation. Several other disputes between trade unions and parts of the rail industry are also reaching the stage of strike action. Many passenger companies are already dealing with ongoing disputes, but Network Rail staff entering into a nationwide dispute could force the UK government into drastic action – including emergency legislation and prioritising freight traffic to ensure that essential supplies are delivered around the country.

Speaking on Tuesday night, RMT general secretary Mick Lynch said that without resolution, action was likely within a few weeks. “Today’s overwhelming endorsement by railway workers is a vindication of the union’s approach and sends a clear message that members want a decent pay rise, job security and no compulsory redundancies”, he said. Lynch added that the union’s executive would now meet to plan a timetable for strike action from mid-June. “We sincerely hope ministers will encourage the employers to return to the negotiating table and hammer out a reasonable settlement.”

Staff at every train operating company balloted in England, except Gatwick Express, voted in favour of strike action. The staff serving the dedicated London Gatwick Airport voted for action short of strike action. The tiny Island Line serving the Isle of Wight voted not to take part at all. Elsewhere, there is already a bitter dispute running in Scotland, which has forced the publicly owned ScotRail to slash services since Monday radically. Trains in Wales under the operation of Transport for Wales were not involved in the ballot.

In a measure of the gravity of the dispute, Network Rail staff have not participated in a national strike since 1994. However, there has been a predictably disillusioned response to the news, with some commentators claiming Britain is being held to ransom by the union. In a statement from Network Rail, their chief executive Andrew Haines said there would be no winners. “Everyone loses if there’s a strike”, he said. “We urge the RMT to sit down with us and continue to talk, not walk so that we can find a compromise and avoid damaging industrial action.”

RMT has already told UK media sources that it will announce strike plans this coming Tuesday. 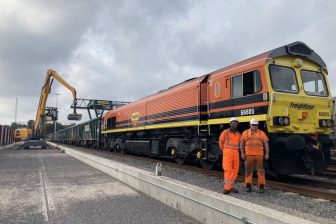